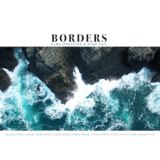 Elma Orkestra & Ryan Vail 'Borders' album Released 14th June on Quiet Arch Records Watch 'Borders' Trailer - https://youtu.be/Fjg1-j22mYc Uniting two of the Ireland’s most forward-thinking musical propositions - Eoin O’Callaghan, AKA Elma Orkestra and Ryan Vail - Borders is a singular collaborative project. Spanning symphonic ambience to widescreen electronica, it’s a genre-warping meeting of the minds from two of the country's most innovative artists. Having both been releasing music independently of one another since 2012, the album is a project that has almost felt destined to happen. As two artists residing on either sides of the border in Derry / Londonderry, their paths have entwined several times in the past. Now, mirroring the spirit of the times - of grasping for unity and togetherness in an unpredictable, ultimately borderless world - Borders is a release that sees those creative paths meet head-on. Across eight tracks, from opener ‘Droves’ to the beat-laden outro ‘Arlene’,O’Callaghan and Vail masterfully blur the contours between contemporary electronic and classical realms. This breaking of new ground - of pushing boundaries and thwarting expectations via attention to detail and a joint penchant for analogue equipment - is what underpins Borders. “We know what we like and why we like it so we were hyper- critical of every sound we committed to,”saidO’Callaghan. “We both have an array of old analogue gear and it always delivers. We were constantly aware of the important of having continuity throughout the album so we tried to limit ourselves to a sound palette. As time went on the palette grew in size but we kept it under constant scrutiny.” They create a new continent of sound, a world where Borders don’t exist Though it was titled before the looming spectre of Brexit, Borders, as an album, encompasses much bigger universal themes about belonging in a world where division is more rife than ever. And yet, there’s a uniquely personal aspect that runs throughout the release.“The album was written with the mindset that we were scoring the border between the North and South of Ireland,”revealsVail.“While performing the album live, the audience will see a visual journey across various parts of the border.” Underlining the collaborative nature of the release is the presence of Dublin spoken word poet, Stephen James Smith (‘My Ireland’) and Moya Brennan, who sings in both Gaelic and English on ‘Colours’). Combined with O’Callaghan and Vail’s meticulous, inspired compositions, these tracks only serve to highlight the album’s staggering feat of collaborative spirit. "If listeners let the deeper meaning behind the project sink in as they listen, then the project will have a more powerful side note,” says O’Callaghan. “I want them to feel angry, happy, communal, empathetic and we can’t forget... they need to feel the need to dance.” Quotes: “You Have To Hear This” - The Irish Times “Elma Orkestra and Ryan Vail offered a symphony of classical sounds and electronica of such percussive power, it shuddered the ground to a thousand feet down, as it soared the spirit high into the rafters...we’d just been at the best gig on anywhere that night. Like – ANYwhere.' - Eamonn McCann, Hot Press Magazine "Marrying balmy synth progressions with a slew of propulsive beats and swarming textures, the seven-minute ‘Arrival’ is an outright peak from the release.” - The Thin Air "Coming in just short of eight minutes, it makes for truly compelling listen." – Nialler9 Live: June 14th– Sebright Arms, London June 15th – Other Voices, Belfast June 27th– Workman’s Club, Dublin June 28th– The MAC, Belfast July 4th – Other Voices, Berlin July 6th – Earagail Arts Festival, Letterkenny August 15th-17th – Stendhal Festival, Limavady