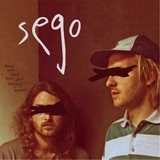 LA-based duo Sego have unveiled a never-before heard track, "Stars", taken from their forthcoming debut album, Once Was Lost Now Just Hanging Around. The 13 track album will come out via Raygun Music in the UK on May 6th, 2016. Sego collaborated with visual artist Gustavo Torres aka Kidmograph to create visual loops to accompany each of their songs.

Sego has previously released two wildly inventive EP's - Wicket Youth via the French taste-maker label Kitsune and Long Long Way From The Fringe with their US label Dine Alone Records. Sego is oft compared to DFA or LCD Soundsystem, though the duo play everything live with a penchant for classic instrumentation, perhaps more reminiscent of Mellow Gold-era Beck or Pavement. Their stream of consciousness lyrical style often muses on the mundane in life, using word play, witticisms and slacker criticisms of the world they see around them.
Spencer Petersen and Tom Carroll grew up as "good ol' Utah boys." Growing up in Mapleton, Spencer studied symphonic bass in high school and college before focusing on audio engineering and studio production.

He's a multi- instrumentalist who writes songs from the drumbeats up. Tom hails from a family of traditional Irish dancers and cut his teeth in a drum-and-fife band. The two met while playing together in an outfit called Elizabethan Report (later known as Eyes Lips Eyes). They left Utah, moved to Los Angeles and watched projects build and fizzle as they grasped at something akin to adulthood, never quite reaching it and never being too upset about the mistrials.

MORE ABOUT SEGO
Sego is rhythm distilled and pure. The Los Angeles-by-way-of-Provo duo of Spencer Petersen and Thomas Carroll churn out percolating and pummelling beats that coalesce into persistent, spastic grooves that are just as jittery as they are danceable. Once Was Lost Now Just Hanging Around, their debut album (out May 6, 2015), introduces them as a band turned inside out, the rhythm section taking lead while the guitars and keyboards add jaded, jagged texture. It's the sound of postmillennial city life chronicled by two millennials from rural Utah: '80s kids updating those sounds to the '10s and in the process rendering the familiar fresh and unfamiliar.

Spencer and Tom operate out of what they call the Cube, a warehouse in downtown L.A. that's part industrial-park facility, part urban hippie commune. "It's in this weird industrial wasteland downtown," says Spencer. "We share a perimeter with the UPS trucking yard and a cement factory." They are upstairs in the loft with a few other bands as roommates; downstairs is for storing gear, rehearsing, recording, and hosting the occasional concert or party.

The Cube is the locus for a small community of likeminded musicians. "Everybody's on the same page here," says Spencer. "We're all trying to accomplish similar things, so we're all contributing to each other's projects and helping each other out. If you need art direction or a second opinion on a riff or whatever, someone's always got your back." But it also breeds some friendly competition, motivating each musician to do his or her best work.

It was here in the Cube that Spencer wrote and recorded most of the tracks on Once Was Lost Now Just Hanging Around and the previously released EPs Long Long Way From the Fringe (Dine Alone) and Wicket Youth (Kitsune). He locked himself up in the studio and painstakingly assembled the recordings, often starting with drum tracks and slowing building songs up from there. "When you start with drums, the beat naturally becomes a little more wonky, because there is all that space you have to fill. That makes it much more interesting to me. Whereas if there are all these vocals and guitars and whatever, the drumbeat is going to get in the way if you get too complicated."

The rhythms that propel these songs are more than just dance tracks, but something closer to musical manifestations of Spencer's own skewed sense of alienation and skewed sense of self.

"I started writing songs with the intent of having someone else sing them, mostly just snippets in a notebook," says Spencer, who has always played a sideman role in previous projects. "But other singers weren't panning out, so I guess it was up to me. This is my first attempt as a singer, which is a whole different scene. I was surprised by how personal it is in both the writing and the performing. I'm not Springsteening it and writing about these characters. It's my life."

That life provides some rich material. Even as Spencer and Tom have moved far away from their home state-settling in Southern California, working with famed French label Kitsuné, and signing with Toronto-based Dine Alone Records-Utah continues to define them as musicians. As a kid in a small town called Springville, Tom took to the drums as though keeping time was the family business. His grandfather is a Civil War re-enactor who plays in a fife-and-drum corps, and his father, uncles, and brothers all pound the skins in various projects.

Growing up in Mapleton, a town of about 8,000 in the north-central end of the state, Spencer always wanted to start a rock band, a mission he undertook with a lot of planning and a bit of luck. "My buddy and I had this pact in fifth grade. Since we were both going to be in a rock band one day, we figured one of us should join the school band to learn drums and the other should join the orchestra and play bass. We flipped a coin, and he got drums." Spencer studied symphonic bass throughout high school and college, yet his interests remained much broader; in addition to avant-garde composers like Bartók and Schoenberg, he was fascinated by what he calls "rough-edged non-guitarists" like Gordon Gano of Violent Femmes and Bernard Sumner of New Order.
The pair cut their teeth in Provo's lively DIY indie-rock scene, playing together in a breakout act called Elizabethan Report (later known as Eyes Lips Eyes). "I pump the Provo music scene wherever I go," says Spencer. "There are so many crazy bands that came out of there. It was so influential for both of us." After their band relocated to Los Angeles, signed to a label, recorded a debut, and then unceremoniously disbanded before seeing it released, Spencer and Tom stuck around the Golden State and kept making music together.

The name Sego seemed fitting for their new project, as it refers to both the Utah state flower and to the short-lived Sego Music and Art Festival, "a crazy little showcase for the scene in Provo. You anchor yourself in that kind of identity. Maybe I'm sentimental, but I feel like that festival has a lot of significance for me."

Spencer and Tom divide their time between Los Angeles and Utah, tracking parts of Once Was Lost Now Just Hanging Around in the Provo basement of their producer, Nate Pyfer. That sense of displacement adds crackle to the album's rhythms and riffs as well as emotional heft to Spencer's candid lyrics. "There's a certain amount of exploration in these songs, a sense of finding your own way," he says, by way of explaining the Sego ethos. "You end up places you never thought you'd find."