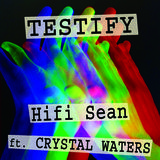 “Brilliantly produced and expertly constructed. It's basically everything you could want from an electronic album in 2016” - Line of Best Fit 8.5/10

“A glorious statement of house music's roots in black, gay and transgressive culture” - The Arts Desk 4/5

“The perfect blissed-out record to soundtrack any afterparty” - Annie Mac

Album of the Day - BBC 6Music

Hifi Sean presents his new single, ‘Testify’. The track is taken from Sean’s album ‘Ft.’ which was released earlier this year to critical acclaim, and features guest appearances from a stellar collection of artists including Yoko Ono, Bootsy Collins, Fred Schneider (B-52’s), and a poignant and moving last recording from Alan Vega.

‘Testify’ is a northern soul, gospel piano 7” style masterpiece - including an acid Moog synth twist. It features the vocal talents of house legend Crystal Waters, who is best known for her huge international hits ‘Gypsy Woman’ and ‘100% Pure Love’.

Sean said: “Testify is everything I want in a musical 3 minute rush, designed to make you feel 18 again!”

Hifi Sean is the songwriter, DJ and producer Sean Dickson. He is most famously known as front man of the Scottish band The Soup Dragons, responsible for a series of huge hit singles; ‘I’m Free’, ‘Divine Thing’, and ‘Mother Universe’. Dickson was also the main creative force behind the follow-up project The High Fidelity, a much more artful and intimate project, critically acclaimed for the releases ‘Demonstration’ and ‘The Omnichord Album’ . Those albums included two very rare musical collaborations between Dickson and legendary Radio One DJ John Peel and also the late Mickey Finn (of 70’s musical giants T-Rex). In some ways, this was the germination of an idea that would provide the conceptual foundation behind ‘FT’.

Sean underwent a total musical reinvention at the turn of the millennium, evolving and transforming his creative energies from a guitar playing band front-man to a DJ. He began playing house, disco and electro in Glasgow’s burgeoning and innovative club scene, before relocating to London in 2006 where he began to become a staple figure on the house underground and afterhours clubs.

As Hifi Sean he is now a highly respected DJ and producer, having held residencies at Ministry of Sound , Shoreditch House , Savage Disco , East Bloc and many more parties in London as well as playing regular international shows in Europe and the USA.

In creating ‘Ft’, Sean carefully fused elements from his past and present musical lives into something unique and joyous.