TUNE Christina Martin - You Ran From Me 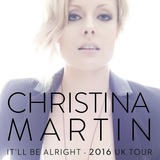 Canada’s award-winning Christina Martin has announced she’ll be returning to the UK this March for a full UK tour, coinciding with the release of her stunning new single – ‘You Ran From Me,’ out March 4.

Following praise from the likes of Clash Magazine, Digital Spy, R2 Magazine and Americana UK, this is her biggest UK tour, performing 20 shows across the country. The tour includes London’s prestigious Green Note on March 16, as well as dates in Leeds, Birmingham, Manchester, Liverpool, Glasgow, Edinburgh, Bristol and Cambridge plus more.

‘You Ran From Me’ is the third single taken from last year’s acclaimed album, ‘It’ll Be Alright,’ produced by Dale Murray, and was #14 CBCMusic.CA/SONICA most played Canadian songs of 2015. And don’t miss the captivating new music video, filmed at Martin’s home in Nova Scotia. “I naively thought it would be a good idea to shoot on two of our coldest Canadian winter days. This made for much cursing on my part, and perhaps I was a bit more difficult for the crew to work with, but it was worth it! This video gives me a chance to show where I’m from, and also a bit of an insight into an old passion of mine.”

Martin’s musical journey has led to extended stays in Austin, Texas, as well as Germany, from where she has cultivated a substantial following across mainland Europe. Along the way, she has earned multiple East Coast and Music Nova Scotia Awards, had songs featured in television soundtracks, performed at Rolling Stone Weekender Festival in Germany, and for the Queen at Parliament Hill in Ottawa.

In 2015 Christina released her 5th studio album, ‘It’ll Be Alright,’ her most accomplished and accessible album to date. Martin made a conscious effort not to be bound by the expectations of those who have categorized her in the past. Although she will never shed her more alt-country and Americana influences, ‘It’ll Be Alright’ utilizes far more pop and rock sonic textures, allowing Martin to explore the many sides of her musical personality. “Going into this record, I wanted a bigger, anthemic sound overall. Each song needed to say something that could resonate with a larger audience.” www.christinamartin.net