TUNE Andy Shauf - The Worst In You 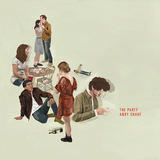 European Tour Started This Week
Consequence of Sound is premiering a new track from Andy Shauf’s forthcoming album The Party which comes out May 20th. The song is called “The Worst In You,” and blends elements of Bert Jansch-like baroque folk with a highly melodic sixties pop. The Guardian recently called Shauf an “Indie Burt Bacharach” with the “appeal of the hippest mainstream 70s songwriters, up to and including Nilsson.” And yet the gifted young singer-songwriter from Saskatchewan has managed to craft it all into a evocative sound that is both captivating and an ideal accompaniment to his immense literary gifts.

Shauf says of the song, “‘The Worst in You' came together really late in the recording of the album. I wrote it in about ten minutes while I was stuck on another song. It's about a guy trying to find his girlfriend at a party, and about how easy it is to jump to negative conclusions."

Listen to “The Worst In You” by Andy Shauf here: http://consequenceofsound.net/2016/04/andy-shauf-shares-pretty-new-single-the-worst-in-you-listen/

Early on Andy Shauf toured Western Canada playing DIY punk venues with just an acoustic guitar. In 2015 he gained attention with an album called The Bearer of Bad News, which he wrote and recorded in his parents' basement, and which NPR called one of “2015's most breathtaking albums.”

The new album The Party is not exactly a concept record, but it was a way for Shauf to get out of his own head. More like an after-party record for the next day’s hangover, when only Shauf’s songs can make sense of the emotionally-charged scenarios which played out the night before. Welcome to The Party. It’s one you’ll never forget.

Andy Shauf is currently touring in Europe. He is set to open for The Lumineers on their highly anticipated European tour this April and May. He will also be doing headlining shows and festivals, including the Primavera festival in Barcelona (ES). Please see below for the full list of shows:

* with The Lumineers
**Headline show