TUNE Mystic Peach - The Eye And The Twitch 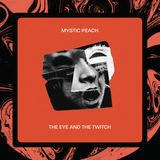 South Coast newcomers, Mystic Peach have unleashed second single ‘The Eye And The Twitch’ via Honeymooner Records. The trio will spend the remainder of 2019 on the road for shows with The Black Lips, Yak and Crows, with a top off to Cardiff’s SWN Festival in between.

Tied in with psychedelia, 90’s grunge, garage rock and more, Mystic Peach met and formed in their hometown of Southampton, and following a period of soul searching from frontman, Curtis Gale, decided to unleash their pent up anger on something productive. Whilst collective favourites such as YAK and DIIV can be heard within their music to date, its works of film such as Clockwork Orange and The Warriors that inspire their output. Those alongside the protest music that surrounded the Vietnam war.

‘The Eye And The Twitch’ is the bands most explosive track, with a chorus as infectious as the insomnia it references, the single explores the toxicity of a lack of sleep on health and relationships.

“It’s about lack of sleep, confusing fantasy and hallucinations for reality and the mood swings that come with it.”

“Mystic Peach are one long bad trip, a lysergic experience shrouded in darkness. The south coast band have an intense live show, one part Syd Barrett and one part the Stooges, a confrontation but often beautiful sound.” - Clash

“With a live show that's become synonymous with riffs and an intensity that will have you looking on in awe as the 3 piece cocoon you with their riotous sounds”. - So Young Magazine