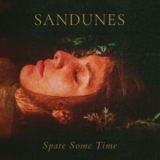 Sandunes shares the lead track, 'Fifty Percent' feat. Ramya Pothuri, taken from forthcoming EP 'Spare Some Time', out on 22nd May via iK7.

Sandunes aka Sanaya Ardeshir’s sound draws a nuanced sketch of her colourful existence within India’s burgeoning creative scene of arts club, evolving dance music cultures and swapping tapes, a reality that is at odds with the one-dimensional typified Western view of India and Indian womanhood.

Having previously collaborated with the likes of Anchorsong, Richard Spaven and other talented artists in Mumbai’s electronic music community, Sandunes’ penchant for collaboration is evident in forthcoming EP ‘Spare Some Time’. The new EP sees Sandunes give us an insight into her inner contemplations, fears and hopes, encouraging us to rid ourselves of our own boundaries and free ourselves of the constraints of reserve, reinforcing the idea that no man is an island and that "in being an island - we fall short, lacking courage to expose ourselves to uncertainty. We’re deprived in our isolation of the tremendous benefit that togetherness and connection brings”.

‘Spare Some Time’, which includes four featured artists, was written and produced in 2019 predominantly from Sandunes’ home studio in Bombay. As a work, it is a testament to the strength in vulnerability and according to the Sanaya, it’s an EP about "making room in our lives for love. For self love, and softness, but mainly making room to fall in love by pulling down our walls’”.

This vulnerability is channelled into opening track ‘Love It Less’ featuring her friend and producer Josh aka JBabe, it’s a soulful, contemplative number which lies somewhere between hypnotic pop and rnb and was born out of an intimate jam session between the two producers. The tempo is slowed down with the following track ‘Burn Every Bridge’ the pained yet cathartic break up number which features the trusted vocals of Landslands who was present on previous EP ‘11:11’. Chirping birds and dulcet tones lift us into the next offering ‘Fifty Percent ft Ramya Pothuri’, a song very close to Sandunes’ heart and one which, in keeping with the EP ethos, displays a more vulnerable and evocative rendition of the artist. The EP comes to an aptly ethereal end with Sandunes and her longtime friend IAMI and their song ‘Simple Thing’, a story about generous love and its capacity to heal.

With inspirations that range from the experimental folk electronic music of Sudan Archives to jazz traditionalists like Dave Brubeck, Sandunes uses her sound as a means of rewriting false narratives and provoking new perceptions, explaining that “I feel like it's very important for me to be prudent, but also celebratory about feminine freedom, as a working, performing, producing, musician from India”.
'Spent Some Time’ tracklisting:

Praise for Sandunes:
‘Eleven Eleven’ feat. LANDSLANDS ' straddles sounds of pop, electronica and jazz, coagulating into a unique and very promising concoction from the emerging artist’ -The 405

‘it’s certainly worth a listen’ - Get Into This

‘EPs like 11:11 have established Ardeshir as a pioneering artist among producers on the subcontinent’ - Resident Advisor

‘crafted with painstaking care’ - The Wire