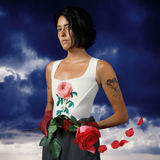 - new album ’The Caretaker’ out on 27th March via ANTI- Records

Half Waif (aka Nandi Rose) shares "Halogen 2," the new single from her anticipated new album, 'The Caretaker', which is set for release on March 27th via ANTI- Records.

Following previous track "Ordinary Talk," Rose comments on this latest track saying: "'Halogen 2' is a song about isolation and the search for strength. The halogens are some of the most reactive elements on the periodic table, and in this song, winter and a life alone in the country are like halogen: an unrelenting force that produces change. I wrote this song at home in Upstate New York last March at a time when my sense of isolation was at its height. And yet I've always been someone who loves my alone time, so there was a sense of shame that I couldn't handle it this time. I needed to tell myself and anyone witnessing my restlessness: 'Don't misunderstand, I do what I must.'"

The accompanying video was directed by Kenna Hynes. Rose continues: "Nearly a year after writing the song, we shot most of the music video in the same location: my house and yard. The two opposing feelings presented by the verses and choruses are represented visually in the Blue World of cold, stagnant country life and the Orange World of the unfettered, fiery strength that lies beneath.”

Over the course of eleven songs, on ‘The Caretaker’ Nandi Rose creates the lush world of a humid summer night, dreaming of and reaching for a season in which she is her "best self." Referring to the album's title, she says, "I kind of created a character. She's someone who has been entrusted with taking care of this estate, taking care of the land, and she's not doing a very good job. The weeds are growing everywhere, and she's not taking care of herself. "For Rose, the character of ‘The Caretaker’ serves as a warning of who she could become if she's not more vigilant, and the resulting album sees her grappling with her desire for independence and the knotty reality that we need each other.

‘The Caretaker’ follows critically acclaimed album ‘Lavender’, named for the lavender that once grew in her grandmother's garden. And on her most recent collection, Rose's family history and intergenerational stories continue to seep their way into the songs. "There's a family legacy of losing and seeking homes, a theme that has followed me," she reflects, pointing to her mother's journey as an Indian refugee from Uganda, and her grandmother's displacement from Lahore after the partition of India. Rose herself was raised surrounded by the Berkshire mountains in Williamstown, Massachusetts, and today she finds inspiration in the shock of seasons of the Hudson Valley where she currently resides.