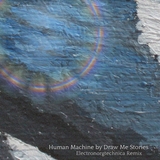 Our debut album, 'Cocoon Machina', is out now. Buy digital and hard copies at: http://drawmestories.bandcamp.com/.
Biography
Self-described as “occupying some space between art-rock, folk and dance”, Draw Me Stories clearly acknowledge that they are a difficult band to capture. To date, bloggers and reviewers have scarcely agreed on what underlies Draw Me Stories’ unique sound; for every Decemberists, there’s a Bjork. For each Talking Heads, there’s a Mars Volta. What makes Draw Me Stories endearing, however, is that they don’t really know either.

Formed in Cardiff in 2008, Draw Me Stories consist of vocalist/guitarist Carl Hodgetts, drummer Samuel Souter, bassist-come-keyboardist Mathieu Albasser and latest addition, multi-instrumentalist Joanne Blake. Following a self-released acoustic album in 2008, their debut 2009 EP ‘The Sky and the Mirror’ lay somewhere between traditional folk music and progressive rock. The 2010 double A-side, ‘Oars/Becomes the Hunted’, took an ominous and occasionally ethereal turn, combining elements of dubstep, folk and jazz. Given the scope of these singles, they were soon signed to electro-rock label Glasstone Records, musical home of You Love Her Cos She’s Dead.

Draw Me Stories are planning to release their debut album "Coccon Machina" in February 2013 on their new label, Glasstone Records. The album is the band’s first time working with producer/engineer, and now musical ally, Charlie Francis (REM, Turin Brakes, Future of the Left). While many artists opt to re-record previous releases for their debut record, Draw Me Stories chose to write the whole album from scratch in 2011. To them, it feels like a second album; “a sort of reinvention”.