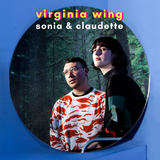 London show @ Rich Mix – 28th Feb 2017 / Supporting Jenny Hval
Virginia Wing is Alice Merida Richards and Sam Pillay. Their new full length record is called Forward Constant Motion.
With many groups, a reduction in their personnel is often mirrored in a simplification of their sound. In Virginia Wing’s case, their reconfiguration from a trio to a two-piece sees them blossoming from the previously cold, Kosmische palette found on their debut LP Measures of Joy into the wider-reaching, fully focused sound of Forward Constant Motion.
The album dives headlong into the synthetic waves that lapped around the edges of their initial work, drawing as much from the compressed thump of Homework-era Daft Punk as the languid new age-isms of Laurie Anderson to create a bold and inventive modern pop record.
“We felt quite out of our depth when it came to making our first album. For the sake maintaining focus and not completely wrecking our self-esteem, we limited ourselves (in terms of influence) to the sound heard on Measures of Joy,” says Pillay. “This time around, we had the confidence in the fact that we were actually capable of making a full length record so we cast the net a bit wider. More than anything, we wanted this record to expand in every direction: the poppy parts are poppier, the weird parts are weirder, hopefully”
The album follows the groups Rhonda 12”, released for Record Store Day earlier this year. The three track record saw them collaborating with Koichi Yamanoha on the Hi-NRG meets plaintive strop of the title track, as well as showcasing their adeptness for skittering, dynamic drum programming.
On Forward Constant Motion they’ve gone further, aided by long-time collaborator Misha Hering, of Holy Mountain Studios. “Misha has a way of shaping our ideas and making them coherent in a way that is hard when you're consumed with creating something. He's somehow able to tap in to your intentions even when they're not fully formed” says Richards.
Virginia Wing’s strength is in taking recognised pop structures and unearthing the exit points within them. Case in point is lead-off single Grapefruit, which emerges from a cacophony of crackles and hums and drifts in and out of focus, even while clocking in at a lean sub-four minutes. Elsewhere, Miserable World is far more rigid; with Richards’ vocals tied to its jutting, jerking movements. Standout-track, Hammer A Nail abruptly taking off from powerful stomp to high-def escapism.
Underpinning much of the record, though, is a sense of the dreamlike or otherworld, the album split up by short, drifting passages where structures melt away. It’s a key thematic point which, in-part, arose when Pillay developed Labyrinthitis (a disorder of the inner ear which results in vertigo and disorientation).

“When you’re all of a sudden spending most of the day in a world of your own, things can quickly turn to the melodramatic” he explains “I started thinking about the human body, health, degeneration, decay, that sort of thing”.
“The symptoms would often come in spells, so I liked the idea of loosely replicating that feeling with the music. That’s why some of the songs stop abruptly or sound as if they are falling apart. I wanted to reflect the fallibility of the human body.
As for Richards, the themes of Measures of Joy – the claustrophobia of being stuck in one place figuratively and literally – remain in the background, however Forward Constant Motion offers a mirror in the approaching idea in the freedom and fear of being displaced. On songs like Lily of Youth or Miserable World, such movement is pointed and direct.
Elsewhere, as on the wistful murmur of Move On (the group’s warped interpretation of late night Lovers Rock tunes) or Sonia and Claudette’s early AM stupor it’s more uncertain.
Then there are tracks, like the glimmering finale Future Body, that focus on the strength of women and female friendship. As Richards explains, the group are acutely aware of misguided perceptions when operating within the paradigm of a male-female electronic duo.
“I've had plenty of experience of my authorship being erased. Live, I still feel this horrible insecurity that if I'm standing on a stage just singing next to Sam then people will jump to the conclusion that I am a conduit for his ideas” she explains. “As a woman, I often find myself having to clarify that we both write the music and I’m not just a mouthpiece for someone else’s vision.”
This is the feeling you get with Virginia Wing on Forward Constant Motion – it’s a record made out of a union that is vital for the on-going evolution of the group. Reduced to their very nucleus, they now sound at their most natural, comfortably processing the boundless ideas that they previously eschewed and shaping them to work, pushing the pair ever further forward.
Virginia Wing Live Dates
04 Feb: Profound Sound @ Folkestone Fringe Festival, Folkestone, UK
19 Feb: DOOR, Dortrecht, Netherlands
20 Feb: Club Heim, Hamburg, Germany
21 Feb: ACUD, Berlin, Germany
22 Feb: Ostentor-Kino, Regensberg, Germany
23 Feb: Twiggy, Varese, Italy
24 Feb: Lio Bar, Brescia, Italy
25 Feb: Ex Cinema Aurora, Livorno, Italy
28 Feb: Rich Mix, London, UK (supporting Jenny Hval)