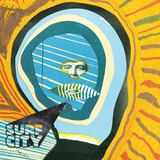 'NYC' is taken from the new Surf City album 'We Knew It Was Not Going To Be Like This'
Available now:
http://www.firerecords.com/site/index.php?page=release&releaseid=1020

New Zealand band Surf City's forthcoming album We Knew It Was Not Going To Be Like This continues their love affair with psychedelic, reverb-swathed guitar pop, drawing from their Flying Nun forefathers The Clean and The Chills, as well as the fuzzed-up dream pop of The Jesus and Mary Chain and the loopy noise of Animal Collective. This time round the songwriting is stronger, the tunes are hookier and the sound is even more lush.

Named after a random snippet of overhead conversation in a crowded South Korean bar, We Knew It Was Not Going To Be Like This captures a haze of broken connections, isolation in the belly of the city. Recorded in multiple sessions from different corners of the world - New Zealand, New York and South Korea - this is their second to be released via London label Fire Records, whose back catalogue boasts a host of classic dreamy acts such as Spacemen 3 and Bailterspace, as well as newer Antipodean bands such as Opossom, Blank Realm, Lower Plenty and Scott & Charlene's Wedding.

Initially a four-piece formed by Davin Stoddard and Josh Kennedy with Josh's brother Jamie on bass and Logan Collins on drums, Surf City released their debut EP in 2008. Arch Hill went on to put out their debut album Kudos domestically in 2010, before it was released worldwide by Fire Records in 2011. The album enjoyed plaudits from the likes of Stereogum, who praised their "impressively assured sound" and "perfect 2-minute pop storm." Pitchfork noted that "their punky psychedelic pop is impressive" and admitted "Surf City's pleasure for pleasure's sake approach already has me pining for more."

The band toured the US and NZ/Australia before taking a brief hiatus while Davin did a good amount of traveling. Josh returned home to the new challenge of fatherhood and left the band and Davin moved to New York, where he found a basement studio in Chinatown and began to work on the new album. He soon realized that the Big Apple wasn't really for him (revealed in the song "NYC"). He returned to New Zealand and continued recording with Jamie now contributing heavily on all instruments and in the production and recording. Davin soon found himself in South Korea, teaching English, and far removed from everyone he knew. Filling so many of his late nights and early mornings with recording additional vocals and guitar parts in his apartment, the paper-thin walls would eventually cause the tenants who lived upstairs to move out as a result.

During this time Davin was listening to a lot of Bob Dylan, Scott Walker and Leonard Cohen, who all coloured the lyrical style that appears on the album. In many ways it's a sad record, reflecting the loneliness and introspection that can occur whilst traveling and spending a vast amount of time alone on buses or trains or in airports with these legendary songwriters on repeat.

It's also a very modern record with songs like "I Had the Starring Roll" talking about days spent on the internet with a tinfoil hat, laboring over all of the problems in the world but not being able to solve the dilemma about being with the one you want. "NYC" discusses the constant insecurities about being in the band and how we compare popularity by how many facebook likes we have.

We Knew It Was Not Going To Be Like This is in some ways a massive progression from Kudos, with richer context, deeper lyrics and a melancholy undertow. Musically, the band have developed their signature reverb-heavy fuzz rock in to something more gutsy but whilst retaining a keen ear for melody to create some unforgettable tunes.