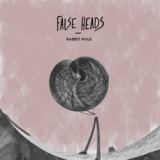 
After introducing their imminent debut album with first single ‘Fall Around’ in October 2019, London’s rising trio False Heads are kicking off their biggest year to date with a monster of a track. Second single ‘Rabbit Hole’ is set for release on the 24th January via Lovers Music.
Building up an explosive reputation over the last 3-4 years, False Heads’ aggressive sound hasn’t gone unnoticed, picking up support from some of the industry’s biggest names and resulting in tours across the globe. After easing their way into their album campaign with the infectious indie-infused ‘Fall Around,’ they’re taking things up a notch and showcasing the diversity of their craftmanship and writing abilities with this one. ‘Rabbit Hole’ is without a doubt one of their most gnarly sounding releases, with big-room guitar work, direct real-talk lyrics and some of the chunkiest, headbang-worthy riffs you’ll hear in a long time. Exercising their signature sound of going in at full pelt one minute, then melting down to addictive hooks and harmonies-galore the next, ‘Rabbit Hole’ is everything the band represent both musically and lyrically, overlapping the boundaries of rock and metal. On creating the track singer and guitarist Luke Griffiths added:
“We all played an important role in writing this, we all came up with individual pieces and then wanted it to be the heaviest song we could write in standard tuning but with a poppy weird placebo chorus. Lyrically it's about my absolute distain for social media politics and at times the human race. We almost enjoy living down the rabbit hole and living in our own echo chambers just so we can be fucking tribal and spiteful to each other.”
With ‘Fall Around’s music video being added to BT TV’s playlist, YouTube adding it to their ‘New Rock and Metal’ playlist and the track itself getting a spin on Soccer AM and Iggy Pop’s BBC 6 Music show, the band are building on their ever-growing reputation across the board, with a growing list of support from some of the biggest names in the business. It’s no secret that ex-Ramones manager Danny Fields has deemed them “one of the best live bands in the world,” and they’ve received plays and radio support from Jack Saunders, Rodney Bingenheimer, Steve Lamacq, Gordon Smart, John Kennedy and many more.
False Heads ended their 2019 touring by supporting ‘A’ across their UK tour, and with big shows planned to support their album, 2020 promises to be something very special. Its easy to see why they’ve played alongside Queens Of The Stone Age, The Libertines, David Byrne, Band Of Skulls and Frank Turner, and continue to pack out tents and conquer the main stages of the likes of Reading Festival, Isle Of Wight, The Great Escape and more on a yearly basis. In fact, they’re heading to the States in March for their SXSW debut and more shows TBA.
A band truly on the brink of something special, it’s going to be a big year for False Heads who will be releasing their debut album ‘It’s All There, But You’re Dreaming’ – strap yourself in.