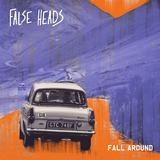 It’s been a long time coming, and perhaps is now needed more than ever. The rumours of a debut False Heads album are starting to take shape with imminent new music. The group that The Ramones’ ex-manager Danny Fields deemed as “one of the best live bands in the world” are about to drop the first single of their album campaign. ‘Fall Around’ starts a culmination of real-talk infused gritty post-punk from the East-London trio and it’s set to land on the 25th October.
After just signing to Lovers Music, this is a real statement of intent from Luke Griffiths, Barney Nash and Jake Elliott. It’s no secret that False Heads have been winning over some of the biggest names in the business over the last few years; Iggy Pop said, “they are young talented and going places,” whilst Huw Stephens referred to them as “an incredible racket.” Their endless list of radio support spans from Jack Saunders (BBC Radio 1), to Gordon Smart (Radio X), to Steve Lamacq (BBC 6 Music) and even the legendary US DJ Rodney Bingenheimer (Sirius XM). Hitting the ears of fans both old and new on a global scale is now something of the norm for False Heads, who are on the cusp of something special with their next instalment.
Demonstrating their incredible ability to mash up gnarly, howling guitar work with delicate vocal harmonies, False Heads dip in and out of their own unique blend of fuzzed up clarity, a trait that the band have mastered since starting out in 2016. Rapidly honing their craft for the last 3 years, ‘Fall Around’ is the perfect example of what the band represent; honest, straight from the heart-to the heart gnarly, punk goodness that has a point to make and a muscle to move. The energy levels are through the roof on this one, especially the anthemic, stadium-sized chorus - you’ll soon be hearing a lot more of the line “It’s All There, But You’re Dreaming.” On creating the track guitarist and singer Luke Griffiths added:
“Fall Around’ came about when I was trying to write a distorted punk version of an upbeat Elliott Smith song. The lyrics were my attempts at getting distaste and confusion toward organised religion out of my system but ending up just being a sarcastic and slightly bitter song about all forms of dangerous tribalism, with the chorus line forming the album title.”
False Heads supported The Libertines on their ‘Tiddley Om Pom Pom Tour,’ and have shared the stage with everyone from Queens Of The Stone Age to David Byrne. They headlined a tour across the UK and Europe in support of their ‘Less Is Better’ EP and have taken on some of the biggest festivals around; Isle Of Wight, The Great Escape, Y Not, Camden Rocks and Reading Festival to name a few. Without a doubt one of the most lively and exciting live bands around, you’ll be able to see them at festivals and supporting ‘A’ across October and November:
Oct 11th Liverpool, Fresh Blood Festival 19th Norwich, Wild Paths Festival
Nov (with A)
20th Bristol, Fleece 21st Oxford, O2 Academy 2 22nd Coventry, Empire 23rd Blackpool, Bootleg Social 24th Glasgow, Garage 25th Manchester, Gorilla 26th Norwich, Waterfront 27th Southampton, Joiners 29th London, Garage
Tickets and info: https://bit.ly/2nWLrTK
‘Fall Around’ marks the start of something huge for False Heads, and they want every single one of you to get involved. Are you ready?