Back to False Heads's Music <
Single 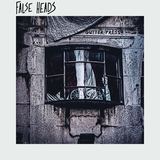 FALSE HEADS RETURN WITH LIVE DATES, NEW TRACK ‘TWENTY NOTHING’, AND ‘GUTTER PRESS’ EP THIS MARCH “These kids make a lot of noise, I like it” Iggy Pop “While Pixies new material finds the band adjusting to their elder-statesmen status, quiet-loud rockers False Heads offer a reminder of Black Francis and co’s youthful imperiousness” Q Magazine “Propulsive, energetic songwriting, those pastoral, deeply English melodies are matched against a raw sense of destruction. Check it out now” Clash Magazine “Cementing a reputation for their epic live shows” The Independent ''Built around a gargantuan riff… a masterpiece” NME Magazine “Loving their punk rock, mixed with a bit of indie as well” Kerrang! “False Heads might be new kids on the block, however, they're already well versed when it comes to the art of songwriting” Drowned in Sound Having been hailed by Iggy Pop as one of his favourite bands of the moment, declared “the future of rock n’ roll” by ex-Ramones manager Danny Fields, signed up by The Libertines drummer Gary Powell to his 25 Hour Convenience Store label, given Pete Townsend’s studio to record in, and named as one of their tips for 2017 by both Fred Perry Subculture and This Feeling, it’s fair to say that there’s a hell of a buzz swirling around the young East London trio False Heads right now. The Independent, NME, Clash Magazine, Q Magazine, Artrocker, Drowned In Sound, BBC 6Music, Radio X, Kerrang Radio (where the band were playlisted), and BBC Radio 1’s Huw Stephens have also all waded in with support and praise for the trio’s delinquent, punk-driven assault, that finds them caught somewhere between the early grunge of Foo Fighters, the infectious songwriting of Pixies, and the snotty punk attitude of The Buzzcocks. Following their remarkable ‘Thick Skin’ and ‘Weigh In’ single releases in 2016, False Heads went on to perform at The Roundhouse in London for the Punk Weekender event, played an acclaimed set at Camden Rocks festival, a live session for BBC Introducing, and were even interviewed by The New York Times. Meanwhile their avid fanbase continues to grow as the excitement around the trio builds. False Heads will now return in 2017 with their ‘Gutter Press’ EP, featuring a string of hard-hitting tracks, including Iggy Pop favourite ‘Slew’, and two stellar new tracks ‘Twenty Nothing’ and ‘Comfort Consumption’. The new EP delivers five tracks that capture False Heads perfect riot of energetic, leering bawdiness, and set a huge marker for a band whose remarkable rise is seemingly unstoppable. With their frenetic live shows taking on a life of their own, False Heads have also announced their first dates of 2017, with select shows across this February and March. False Heads ‘Gutter Press’ EP will be released through 25 Hour Convenience Store on March 10th 2017. The band have also partnered with Pledge Music on the new release, with exclusive signed pre-orders on vinyl and CD, along with other merchandise, available from HERE now. LIVE 2 Feb – BUCKINGHAMSHIRE – BUCKS STUDENT UNION 23 Feb – MANCHESTER – Dive NQ 24 Feb – LEEDS – Milo Bar 25 Feb – SHEFFIELD – The Rocking Chair 11 Mar – LONDON – Nambucca 17 Mar – BRIGHTON – Bleach WEBSITE / SOCIAL NETWORKS; www.facebook.com/FalseHeads www.falseheads.com http://www.25hourconveniencestore.com/