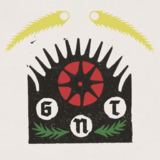 Explosive from the outset, "GNT" features the band's recognisably ferocious riffs and singer Matt Baty's cathartic bellow; a highlight from the new record and the band's live set.

The track's catchy chorus features backing vocals from a choir made up of local friends and musicians, including Richard Dawson and Lyubov Soloveva of Pinkshinyultrablast.

"GNT" follows lead single "Cake Of Light", which was added to BBC 6 Music's B Playlist, selected as Track Of The Week by Huw Stephens on his BBC Radio 1 show, alongside support from multiple shows across a handful of national stations.

Following two raucous, sold-out album launch shows over the weekend in London and Newcastle, the band are starting their UK tour later this month. The tour will be followed by a run of their biggest shows to date including London's The Scala and The Sage, Gateshead.

Praise for the new album King Of Cowards:
"Possibly the best British rock album of 2018." 8/10 Line of the Best Fit
"A force to be reckoned with." 9/10 Louder than War
"Sound like an advancing storm." 4/5 The Guardian
“Sustained Sabbath inspired menace." 8/10 Uncut
"A band to be genuinely excited about." The Quietus
"Thundering riffs and filthy psychedelia." Classic Rock
"Gives your eardrums a good kicking." 8/10 Drowned in Sound
"Pigs x 7 have taken their sound to another level." Echoes and Dust