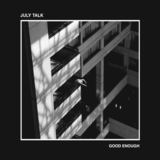 July Talk is a Canadian indie-rock quintet who are releasing their third album Pray For It this Friday via BMG.

With a growing fanbase in the UK, the band have an impressive list of international accolades including touring with the likes of Red Hot Chili Peppers, Weezer, Frank Turner, Against Me!, and The National, having a handful of singles with 5mil+ streams, winning a swathe of international songwriting awards, and having tracks featured in major films & TV series.

Ahead of the album release the band have released new single, ‘Good Enough’, which is a driving, lo-fi indie track centred around singer Leah Fay’s sooting vocals.

‘Good Enough’ reckons with vulnerability as a superpower. With a wash of beach sunset synths, the tracks is about depressive spirals, and the elusiveness of light; in unblinking hollowed helplessness. The song taken from their forthcoming album, Pray For It, was produced by Graham Walsh (Alvvays, METZ) and mixed by Rob Schnapf (Elliott Smith, Beck).

July Talk stormed in with the flinty radio-ready rock of their debut, followed by the volatile siren songs of Touch, an album of sawtoothed pop + convulsing tension. For album three, the band cracks their equilibrium open to find a thrilling new balance in asymmetry. With Pray For It, July Talk commits to the possibility of alternate endings, acknowledging the power of vulnerability as a way to begin again.