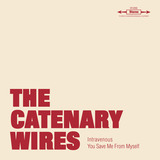 As always, here at Elefant Records, we are on the lookout for any new adventures that come from Amelia Fletcher and Rob Pursey. Together, and with other components, they have been the protagonists of some of the best indie-pop songs in the last 30 years, whether it’s fronting TALULAH GOSH, HEAVENLY, MARINE RESEARCH or TENDER TRAP. Now, their new project together is here, and it’s called THE CATENARY WIRES. And in advance of the album that will be released in June on 10 inches Mini-LP and CD formats, we have a digital Single called “Intravenous.” This time, we have an acoustic piece that confirms the continuously more mature sound of their music. But, nobody jump to conclusions. In this barer, stripped down format, their melodies sound more heavenly than ever, close to groups like Laura Veirs, Hope Sandoval and MOJAVE 3. “Intravenous”, is a good introduction to the band, its addictive chorus capturing something somehow universal. It tells the story of resignation and the truth about love, its suffering, and specifically the intensity that these limitations give us. As a gift we get “You Save Me From Myself”, an unreleased track that won’t be included on their album. The lyrics of this song, and Amelia’s voice crumbling over the sparseness of the arrangement, make it sound especially resonant and personal. Barely contained sensitivity, songs especially appropriate for people who live life with passionate intensity, but at the same time with subtlety and simplicity. In short time, so much more.