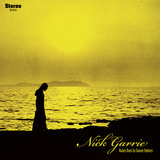 The cliché of a second youth turns into something magical and marvelous in the case of Nick Garrie. The author of “The Nightmare Of JB Stanislas” was resuscitated with that incredible “49 Arlington Gardens”, cherished by Scotland’s indie scene: Ally Kerr, Norman Blake (TEENAGE FANCLUB), Francis McDonald (NICE MAN, TEENAGE FANCLUB, BMX BANDITS), Duglas T. Stewart (BMX BANDITS) and Duncan Cameron (DELGADOS, TRAVIS, TRASHCAN SINATRAS). And now it’s being revived again with even more strength than you thought possible, accompanied by Spanish musicians. “Rainy Days In Sunny Sydney” is a totally new Nick Garrie song that’s being released as a digital single. It was arranged and produced by Vicente Maciá, better known as PIGMY, the once singer in the Spanish group CARROTS. The song recovers the folk spirit from Nick Garrie’s first recordings, full of mandolins and banjos. It’s caressed by Jordi Montero’s glorious violins, which move from evocative and precious to Russian accents. Eli Martín’s sparkling choruses lift the song’s opening to magnificent levels, and the trot of Pau Philippe’s drums turn surprisingly toward eastern Europe, making the Slavic origins of the songwriter’s paternal family relevant. The production is so rich, full of details and nuances, showing us PIGMY’s incredible talents with arrangements, with an omnipresent slide guitar that reminds us of the one that appeared in his legendary “Ink Pot Eyes”. And, as PIGMY himself says, “the objective was to create a new classic in Nick’s repertoire, and leave his fans satisfied.” Although the truth is that it doesn’t only leave us satisfied – after such a marvelous experience, it leaves us yearning for more. In the video for “Rainy Days In Sunny Sydney,” we see Nick walking around his old school in Norwich (where he wrote the songs for “The Nightmare Of JB Stanislas”), intermixed with images of Sydney.