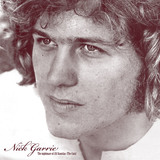 Everyone who is irrevocably hooked on music knows that, hidden in the archives of some record labels, there are unique and incomparable gems that have remained unjustly hidden over the years, due in large part to the strange whims of the industry and its destiny. Elefant Records is proud to definitively recover one of these albums, maybe one of the most important yet to be discovered. After giving the necessary recognition to Nick Garrie with that “49 Arlington Gardens” which he released two years ago with Duglas T. Stewart (BMX BANDITS), Ally Kerr, Norman Blake (TEENAGE FANCLUB), and a full entourage of huge and renowned Scottish musicians, the time has come to focus the spotlight on his legendary work. And the thing is, “The Nightmare of J B Stanislas” is a missing link in music history, a cursed album that oozes inspiration from all sides, a mix of the intensity of Tim Buckley with the psychedelic touch of THE LEFT BANK, inimitable and inexplicable. The story begins with a young Garrie who in 1969 is called by the French label DiscAZ (also home to artists such as Brigitte Bardot and Michael Polnareff), to record a debut album, after they heard some demo tracks that impressed them tremendously. Eddie Vartan (Sylvie Vartan’s brother, and an important representative of the French rock scene) is put in charge of production, for which he seeks the help of a 56-musician orchestra to fill the album with arrangements and melodic lines – and album that its composer had brought acoustic and bare. The result is the “The Nightmare of J B Stanislas” in which the seriousness of Garrie’s melodies, his abstract stories flooded with a Saint Tropez breeze, create a strange chemical reaction with Vartan’s orchestrations, and give way to this incredibly addictive work, an authentic canon of beauty, of imagination, of extravagant arrangements full of fantasy. The end of this exciting dream comes when, few short days after the disc goes on sale, the head of DiscAZ, Lucien Morisse, commits suicide, leaving the album orphaned, with no promotion or plan, which resulted in very few copies every getting sold. All of this is just cause for this definitive edition, which includes the original album, those demos that so impressed the people at DiscAZ, his first single, some recordings done in Portugal in 2002, and above all, “The Cuts”, the recuperation of some of the compositions from that era that were never recorded, and that are now recorded by Garrie himself accompanied by the Scottish crew from “49 Arlington Gardens”. And to all of this we have to add the detailed and deluxe edition of an incredible 44-page book in which Garrie tells the story of his own life, and with it, the story of an album that will never again be called cursed. This work is what has won over people like Gary Olson (LADYBUG TRANSISTOR), Francis McDonald (NICE MAN, TEENAGE FANCLUB), Guille Milkyway (LA CASA AZUL) and our beloved Tracyanne Campbell (CAMERA OBSCURA), and now it’s time it gets its what it deserves, and this incredible edition is the first step.