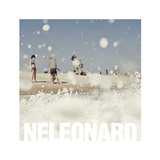 A few months ago, we talked effusively about NELEONARD’s songs, the glory of which was captured on that marvelous 10” Mini-LP called “Agosto”. This 2015 they are already confirmed at festivals like Primavera Sound, Mal D'Altura or Contempopránea, and we’re celebrating a fruitful year with a new single from Nele and friends. These two new songs confirm that NELEONARD is one of the most biggest promises in Spanish pop, with music that is sober, fresh, but also has so much to say, and a tremendously rich lyrical and musical discourse. “Casi Cuela” begins brightly, with wind instruments pushing the levels of optimism through the roof. Chamber pop, with an exciting dynamic, combining the emotional lyricism of LA BUENA VIDA and LE MANS first steps with the melodic force of BELLE AND SEBASTIAN, Sondre Lerche, and Jens Lekman. “Buscaremos Los Nombres” is a B-side in every way. It’s the complete opposite of the A-side, with a more serious, solemn tone, and influences from popular folklore and experimental folk groups. Turbulent and turbid, stormy and watery. Impressive. With each new NELEONARD release we hear, we reaffirm that we are looking at one of the most satisfying groups in Spanish pop in the coming years. You can hear it yourselves now.