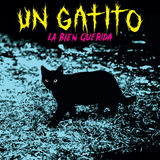 Ana Fernández-Villaverde is back and this is the first song she has released since her most recent album, “Brujería” came out (September 2019). Moving easily from one genre to the next, she is here with this new single, “Un Gatito”, an instant anthem that also serves as an appetizer for her new album, which she is already working on. The song talks about loving someone for who they are, with all their faults. Twisted nuances and foggy ambiance surround the completely uncensored description of a person – but without leaving out the sweetness. She leaves us with verses like: “Un oasis en el desierto / Un calendario de adviento / Un niño perdido en un aeropuerto / Un día de fiesta y un bar abierto / El caminito que me lleva al huerto / Con la verdad al descubierto” (An oasis in the desert / An advent calendar / A lost child in the airport / A holiday and an open bar / The path that leads me to the garden / With the truth exposed). It is impossible to say so much with so little. It’s one of those songs that gets stuck in your head and never goes away. Produced by Alizzz, René and LA BIEN QUERIDA, mastered by Álex Ferrer, and with a cover designed by Mario Rivière (who already worked on the cover of “Brujería”), the song also comes with a stupendous video, by David Vega (RAYDEN, Paula Cendejas, ST. PEDRO, ABHIR, MAKA, Eva Ruiz), in which, in a kind of anonymous meeting, each person makes a confession, with interludes marked by a headlight and Ana as the light that guides and illuminates them. It is a tremendous pleasure to see one of our favorite artists in the midst of such a creative state, feeding our souls with music and beautiful words. This is the beginning of a new stage, and with LA BIEN QUERIDA you never know for sure where it can take you. Is there any kind of adventure better than one without a clear destination?