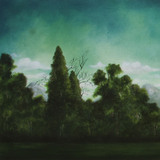 “Premeditación” is the first of the three Maxi-Singles (500-copy limited-edition, 12” green vinyl) that make up LA BIEN QUERIDA’s new work. “Nocturnidad” and “Alevosía” will complete the three-single series. Words will not help us in this project, when we submerge ourselves in its details, its hidden corners, its riddles, and its emotions. We can only give you a few “hints”. On “Poderes Extraños”, the protagonist of the A-side, we catch another glimpse of NEW ORDER’s influence, as happened before with “Ceremonia”. And here, this bewitching, elusive chorus toys with us, and makes our heads spin without knowing where this journey is headed. The appearance of the paranormal concepts will come into play throughout the whole series in a very special, very spacey way. “El Origen Del Mundo” is another song led by the bass and decorated with curious keyboard textures. Here Ana sings once again about disillusionment and broken promises; her style is at its most recognizable. And from there to desolation. “Alta Tensión”, a song that begins with enormous and electrifying lyrical power, with the omnipresent piano and Jordi Montero’selegant strings, drawing a landscape in which Ana repeats, “no te quiero, yo ya no te quiero” (I don’t love you, I don’t love you anymore). An electric jump explodes and turns into a triple backflip into the emotional abyss and the song wins you over. “Disimulando” wraps up this first part of the series, with the solid programming work of Joe Crepúsculo, and which explodes into a chorus of out of control percussion, still full of the flamenco and Arabian influences that people have talked so much about in other occasions. Rough but dark, balladic but troubling. The cover art makes up the first part of a painting by Ana Fernández-Villaverde which the other two Maxi-Single covers will complete, along with the cover art of the CD that will collect all the songs. Coinciding with the release of the first vinyl, there will be a video. This video, together with the other two that will accompany the upcoming releases, will make up a small film directed by Juanma Carrillo, in which all the obsessions that this project has provoked will be unleashed. Hold on tight, because after this release on October 6th, there will be two more, on January 6th and March 6th. Will we reveal inscrutable mysteries? Will we discover unexpected surprises? What there is no doubt about, given what we have seen, is that the journey is worth it. Hop on for the ride.