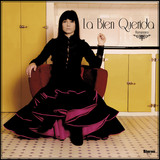 LA BIEN QUERIDA’s album is one of the most anxiously awaited Spanish indie-pop albums in recent years. And it’s because the word fell in love with her demo (chosen by Mondo Sonoro as the best of 2007, highlighted in Rockdelux and listened to thousands of times on myspace, where their page is one of the most visited new artist pages). LA BIEN QUERIDA, which is to say, Ana Fernández-Villaverde, turned to David Rodríguez (BEEF) to record her debut (7 songs from the demo and 5 new ones), attracted to him for the marvelous creativity of his solo project LA ESTRELLA DE DAVID. Ana wanted to domesticate David’s stratospheric arrangements and cubist production toward clean sounds that fit better with the friendly environment of her beautiful songs. And she really did it. David’s inventive magic and Ana’s sweet melodies meld together to make an exclusive space in which flamenco, Arabian music, rancheras and even techno mix. They didn’t hold back at all (they work with the ORQUESTA ARAB DE BARCELONA, a flamenco guitarist, even Joe Crepúsculo on vocals). But those are only the colors of the songs, which do not distract from their principal component: a marvelous collection of exciting vocal melodies, with an overwhelming beauty and interesting lyrics that strip down relationships and bare feelings with moving sincerity. The album follows the harmonic line of LOS PLANETAS, the charming sweetness of LA BUENA VIDA and the contagious romanticism of FAMILY, but really it creates a unique space. Maybe the clearest parallel can be drawn with THE MAGNETIC FIELD’s monumental “69 Love Songs”, with songs that appear simple on the surface but have a highly defined character and artistic personality that escapes all styles, or maybe it brings them all together without us realizing it. And, as on “69 Love Songs”, what is truly important is the emotion that the songs transmit. “Corpus Christi”, “De Momento Abril”, “Santa Fe”, “El Zoo Absoluto”, “Bendita”, “7 Medidas de Seguridad”... it’s a chilling repertoire that can be enjoyed as much in the emotion-flooded open heart as in the detail-oriented head, paying attention to the musical details that fill the production. It is, without a doubt, a landmark album.