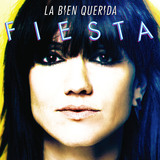 “Romancero” was a national landmark. The proof of this is all the covers on the many industry magazines, hits in countries like Mexico and the U.S., nominations for album of the year in the most respected media, the Best Album and Breakthrough Artist awards from the Premios de la Música Indepediente (Independent Music Awards), her participation on LOS PLANETAS’ album “Una Ópera Egipcia”, her presence at the best festivals (FIB, Primavera Sound, South Pop…), and the album was even mentioned as one of the best discs of the decade in such a prestigious publication as RockDeLux. But “Fiesta” takes the next step. It shows that wasn’t something passing, but something as astonishing as the fact that Ana Fernández-Villaverde is the most important thing that’s happened to Spanish pop in recent years. Once again with David Rodríguez (BEEF, LA ESTRELLA DE DAVID) collaborating, “Fiesta” honors its name: an incomparable celebration, an involuntary homage to music, a gift to the ears of everyone who loves music. Unclassifiable and inimitable, indefinable but above all exciting, LA BIEN QUERIDA’s music plays with styles to create a masterpiece. Because once again we can hear flamenco, rumbas, rancheras, Mozarab music, waltzes, electronic music, and even a solemn Holy week march! But all of that always serves the pop, with immortal melodies, and above all unforgettable lyrics, that include lines that irremediably break our hearts: “Hay cosas que hubiera preferido no saber / Y todo lo que sabes que no quiero comprender / pero hoy al volverte a ver, / decidí empezar a quererte otra vez” (There are things I wish I didn’t know / And all the things you know I don’t want to understand / but today I’m going to see you again / I decided to start to love you again), she sings on “Hoy”, the first single from the album, while on “Sentido Común” she tells us, “Me estás robando horas de sueño, / me estoy mintiendo y me lo creo, / pero como te estoy queriendo / no tiene memoria ni tiene tiempo” (You are stealing my sleep, / I am lying to myself and I believe it, / but the way I love you / has no memory and no time). That’s why “Fiesta” is a timeless album, monumental, that exceeds the concept of landmark we mentioned before, and it comes back to remind us what art really is. And the thing is, true art is always a party for the senses.