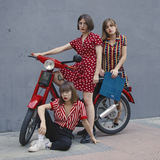 To make the wait a bit lighter until “Movidas” (their anxiously awaited 10” pink vinyl debut Mini-LP, coming out in November) comes out, and after the pop appetite that “Canción De Pop De Amor” created, CARIÑO give us this great little gift. After how well-received their live version of C. Tangana’s “Llorando En La Limo” was, they have decided to give it to us in Digital Single format. As they themselves say: “There is so much debate between pop, trap and the limit between the two. What is “Llorando En La Limo”? The truth is that we don’t really know. For us it’s a little bit of everything, and we like this song, a lot. With our version, we have tried to build a bridge to new urban sounds that, to some extent, are ours too. We have slightly adapted the lyrics to our own experiences, meaning crying from feeling down, but not in limos - in friends’ houses, and maybe even on small scooters, because we don’t have a car, but we do have a lot of love. We hope you enjoy it as much as we do”. This is a statement of intent, a juicy appetizer that is betting on breaking down boundaries and biases, on building bridges in music and on the ability to appropriate a song to bring it into totally unexpected territory, where the connotations and readings of the song, even of the emotions it gives off, change radically. Because there is no doubt that these are our CARIÑO: Paola, Alicia and María slapping us with electronic pop with guitars, and belting out their lyrics full of cynicism, ulterior motives, and of course, so much love.