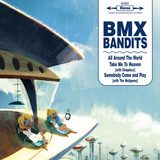 All Around The World

A few months ago we told you about the release of “BMX Bandits In Space,” a marvelous pop opera that was really one of the high points of the already very prolific and inspired career of Duglas T Stewart. Our beloved and illustrious Scottish friend is back on the scene with a digital single that includes three fantastic songs that will, once again, make fans all over the world rejoice. When we talked about his newest album, we specifically mentioned “All Around The World,” the title track of this single, as the essence of how the album feels – a precious melody elevated by THE BEATLES and Burt Bacharach, that opens with one of the most beautiful lines the author has ever written: I believe in beauty / and where ever it takes me / that’s where I’ll go. The first previously unreleased song is a remix of “Take Me to Heaven,” by Sebastian Litmanovich, which is to say CINEPLEXX, who could have already collaborated on the album with songs like “Look At You, Look At Me” or “Elegant Love.” This time he ads dreamy techno-pop details taken from “Bee Stings” to the song. Finally, there is a charming and elegant version of “Somebody Come And Play” by Joe Raposo, from the first season of Sesame Street, which was included on the album “The Sesame Street Book & Record,” the popular TV show’s first album, released in the summer of 1970. This time, Duglas T Stewart is accompanied by THE WELLGREEN, the band formed by Stuart Kidd and Marco Rea (who have also occasionally played with people like Stevie Jackson, of BELLE AND SEBASTIAN) to make a wonderful, delicious song that gets back to the purity and the grandeur of pop music made for children, but that is also equally as capable of getting grown-ups excited. And so BMX BANDITS, despite all the years that have passed, are still amazing us at every turn. We will always be anxiously awaiting Duglas’ new songs.