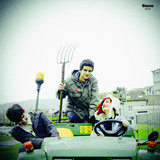 If there is a contemporary group that can be the living image of insulting, impertinent rebelliousness together with the most irreverent youthfulness, that group is definitely AXOLOTES MEXICANOS. Olaya and Stephen met in their school’s courtyard and decided to start a band. They completed their new group with Juan, Olaya’s twin brother. With a median age that barely reaches 19, this Asturian trio goes from crazy punk to the most playful, demo-friendly electro-pop with energy, muscle, strength and a lot of ferocity. They are the protégées of and were produced by Iván Juniper and Eva Guilala, and they recorded in that reservoir of today’s indie pop, the Estudios Kaiju. “Infectados” is the first official release from this young band after their appearance on our Christmas compilation album, “A Christmas Gift For You from Elefant Records”. “Infectados” is the opening-track and it pulls out all the stops. It is HELEN LOVE and PEGAMOIDES dancing pogo, with an inevitable aftertaste of JUNIPER MOON’s best songs, all wrapped up in one song that references one of the group’s biggest passions – zombies. “Sube La Canción” has a delicate, playful melody, but the mood breaks quickly: “Sube la canción o te reviento de un hostión”… “Te enviaré a mi hermano / o a una banda de rumanos / como no la subas ya…” (Turn the song up or I’ll beat you up … I’ll send my brother / or a gang of Romanians / if you don’t turn it up right now…). Definitely one of the band’s biggest hits. “Pandachila” plays perversely with their most naïve and childish side and the rawness of the unleashed guitars and sing-songy casiotones, and then leads into “Aborto”, where any remaining doubts are wiped out. It’s techno-punk with the bpms amped up, insolent and out of control, with lyrics that leave the concept of political incorrectness on par with a bad joke. AXOLOTES MEXICANOS evoke the wildest and most fun moments of the indie explosion that happened in the early 80’s in Spain, above all with their uninhibited lyrics that remind us of SINIESTRO TOTAL’s first songs, (“Las Tetas De Mi Novia” [My Girlfriend’s Tits], “Ayatolah!”, “Hoy Voy A Asesinarte” [Today I’m Going to Kill You], “Los Chochos Voladores” [The Flying Pussies]…); or KAKA DE LUXE’s songs (“Pero Que Público Más Tonto Tengo” [What Stupid Fans I Have], “Viva El Metro” [Long Live The Metro]…); or SINDICATO MALONE’s songs, (“Sólo Por Robar” [Only For Stealing]…); or CÓDIGO NEURÓTICO’s songs (“Totus Tous”, “Pega A Tu Mamá” [Beat Your Mom]…); or GLUTAMATO YE-YÉ’s songs (“Holocausto Caníbal” [Cannibal Holocaust], “Algo Suena Tic Tac” [Something’s Ticking]…); or even like VULPES’ song “Me Gusta Ser Una Zorra” [I Love Being A Bitch]. The AXOLOTES have done their own adaptation of that last song as “Me Gusta Ser Una Gorda” [I Love Being A Fat Girl], with pearls like, “Si tú me vienes hablando de dietas, me cago en tu madre y te vomito en las tetas” [If you show up talking about diets, I’ll shit on your mother and puke on your tits] or “Prefiero cenar yo sola en mi cama, antes que acostarme con quien me hable de ensaladas” [I’d rather eat dinner alone in my bed than sleep with someone who talks to me about salads]. Ladies and gentleman, this is attitude. Eat it up.