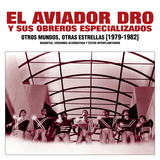 AVIADOR DRO, the group conceived by Servando Carballar and Arturo Lanz, is without a doubt one of this country’s most important groups, and they are true electronic music pioneers, under the influence of bands like DEVO and KRAFTWERK. That’s why it is an incredible honor for Elefant Records to be able to release, as a part of our “Recuerdos Que Olvidé” collection, this double album that includes demos, previously unreleased versions, rarities, and big hits from the period before the release of their second album, “Síntesis: La Producción Al Poder”, in 1983. What’s more, many of the songs included on this album have never been released on vinyl before. We can find a few songs from their first album, “Alas Sobre El Mundo”, two songs from the Maxi-Single “Programa En Espiral”, and one song from the Single “Nuclear Si”, which was the first release on DRO (Discos Radioactivos Organizados, the label AVIADOR DRO created to release their albums after their brief period with the Movieplay label). All of these releases are practically impossible to find nowadays in their original format, and they are real collectors’ items. “El Nacimiento De La Industria” comes from the DRO compilation “Navidades Radioactivas”, which also included Christmas carols from other groups like LOS INICIADOS, DERRIBOS ARIAS and GLUTAMATO YE-YÉ. On this compilation we can also find their versions of the SEX PISTOLS’ “Anarquía En El Planeta” and KRAFTWERK’s “La Modelo”, as well as the theme song they wrote for Jesús Ordovás’ program on Radio 3, the legendary “Diario Pop”. “No Tengo Boca” was previously released on the album “Maquetas”, a compilation released by MR Records that included original covers of other bands like LOS MODELOS, PISTONES and ÚLTIMO SUEÑO. The result is an archaeological milestone in music that reflects an effervescent era in the life of a group. Hyper-roboticised, with their post-nuclear, post-industrial aesthetic, their impossible syncopation, their gritty but at the same time hyper-melodic atmospheres. It’s a sound they will always be a reference for and that they will always be pioneers in, as they called it, the beginning of the man-machine. The music is like something from another galaxy, and to get its bearings needs to find names from another musical planet, like THE RESIDENTS and SUICIDE. It’s a small gem that isn’t only an element for fans to complete their record collections, but something that shows the state of grace of a group that at the time, between 1979 and 1982, was taking their first steps - steps as fresh as they were daring, and as irreverent as they were inspired. Enjoy it.