Back to Eades's Music <
EP 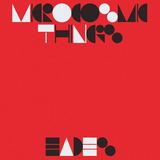 Channelling NYC New Wave cool through a Northern indie-pop filter, Leeds based quintet Eades deliver one of the most exhilarating and rounded debut EPs of the year in 5-track collection ‘Microcosmic Things’, out via their own Bam Bam Records on July 10th. Taking in arch post-punk, buoyant new wave, cinematic classic rock and sticky-pub-floor indie in their sound, there are a number of sonic facets to Eades, all of which are distilled through their LoFi self-produced style. This recourse to rock history doesn’t stop everything being forward-looking – a distinctly modern sound resulting from this coalescence of genres. The themes tackled too are incredibly thoughtful – existential acceptance, catharsis and day-breaking anxiety provide dark subject matters, juxtaposed against a breezy sound. ‘Saying Forever’ open proceedings, a strutting groover built around Dave Lancaster’s wiry bass. ‘Make It Outside’ follows suit, with an immediacy that stops you in your tracks. ‘Forget What You Want’ brings a pop bounce, whilst the scratchy ‘Vivid Dreams’ and Bollywood inspired ‘Same Guy’ are indie-disco earworms for the ages. The well moulded sound holding it all together didn’t come without work though: “Making the EP was a massive learning curve for us. Deciding to do a small collection of songs as opposed to a run of singles meant that we had to do something somewhat coherent. This made us think a lot about our “sound”. Thankfully because we self produced it (which was a learning curve in it self) we managed to use the production to glue it all together. “Lyrically, I pushed the boat out more than I ever had before, taking a lot of time to research poetry and different lyric styles. I even got a thesaurus which has proved extremely useful... I also collaborated with a good friend who’s spent his life writing poetry on a few songs and working with him taught me a lot. I’m pretty proud to finally get it out having done everything ourselves bar the EP cover art.” This considered attitude to their musical and lyrical content, engaging with issues both personal and wide-ranging, exemplifies an eyes-open approach to the world and their music’s place in it. They recently raised close to £1000 for the NHS with proceeds from an especially recorded standalone single. Arriving close to fully-formed in intention across sound and message, their breezy self-confidence, born of time spent cutting their teeth around a fertile scene in Leeds, has started turning heads across the board, with FADER, NME, DIY, KCRW, The Line of Best Fit, DORK Magazine and more lining up to call themselves fans. Eades debut EP ‘Microcosmic Things’ is out on July 10th via Bam Bam Records. Eades are Harry Jordan (Vocals and Guitar),Tom O'Reilly (Lead Guitar), Jof Cabedo (Drums), Dave Lancaster (Bass), and Dan Clifford-Smith (Synths and Percussion).