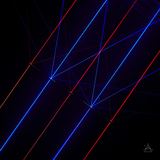 
Leeds-based five piece Vessels today announce details of their fourth studio album, The Great Distraction, which is due to be released on 29 September 2017 via Different Recordings. Featuring collaborations with The Flaming Lips, John Grant, Vincent Neff (Django Django) and Harkin (Sky Larkin), The Great Distraction is Vessels’ most ambitious record to date, and marks further evolution of a band always exploring new avenues of expression.

‘Deflect The Light’,is the second single to be revealed from The Great Distraction, following muscular first single ‘Radiart’. The last track to be completed for the album, ‘Deflect The Light’ is as potently euphoric and psychotropic a collaboration with the Flaming Lips as you could hope for.

“Working with the Flaming Lips was a highlight of this whole process,” says the band’s Pete Wright. “There is no facade; Wayne Coyne lives and breathes the very same eccentricity and optimism that pervades The Flaming Lips’ music, and our entire correspondence start to finish has been a torrent of enthusiasm and silliness. They latched on to the spirit of the music we sent and then amplified it a thousand times over, drenching it in their unmistakeable identity but never eclipsing ours. I am so proud of what we made together.”

While celebrated third album Dilate, and the breathtaking live shows that accompanied it, were characterised by a definitive electronic shift, The Great Distraction is about much more than a desire to go four-to-the-floor. It forcefully delivers on that premise in the widescreen power of opener ‘Mobilise’, in the dark energy of the pulsing ‘Position’, and in the deep build-up of ‘Gløwer’, but some notable collaborations represent another impressive step forward in Vessels’ determined progression.

“We're really aiming to create a living, breathing human version of electronic dance music. There isn't anything more honest and organic than the human voice. The vocals should be an extension of the music we make, and also add something new or interesting,” says Martin Teff.

The results stand tall amongst Vessels’ typically towering slow-burners as Wayne Coyne’s vocal soars towards the clouds on ‘Deflect The Light’, Vincent Neff’s presence adds to the powerful dramatics of ‘Trust Me’, and John Grant imbues ‘Erase The Tapes’ with characteristically austere beauty. “He has such a distinctive voice,” muses Martin, “he really inspired us to create something totally new.”

Where those collaborations embody the hallmark of a band pushing forward, it’s the unrelenting, hypnotic intensity of tracks like ‘Radiart’ and the fragmented, complex beauty of ‘Radio Decay’ that anchor Vessels’ essential evolution in core elements of their past. “A few of the longer instrumental tracks on the album strike a balance between long, dirty, polyrhythmic techno and the math-rock, post-rock band we used to be, and that’s never left us,” says drummer Tim Mitchell.

In that respect, The Great Distraction represents a band analysing its own meaning and balancing the stark realities of life, death and ageing with the explosive bursts of energy that have been a signature, albeit in different styles, across every album.

“We’re not 18 anymore,” Martin notes. “I think this album represents a convergence of where we are in our personal lives and where the band is in its journey. And it all seems to be happening at a time when the world is quite a strange place. The music acknowledges a bleakness and tension, but I think our response is optimistic and euphoric.”

It’s a sense of reflection that inadvertently applied to how The Great Distraction got its title - with the band looking inwards, as well as outwards, inspiration came from an unexpected source. “The title came from a misheard lyric that John Grant had written,” Martin admits. “To us, it resonates in a few different ways. Personally, I like art that has a slower impact like that.”

It’s a sentiment that, in many ways, perfectly sums up Vessels’ persistent patience. Now four albums and over a decade into their shape-shifting life as a band, it would be easy to say The Great Distraction is the decisive culmination of the time and effort it’s taken to reach this point. It’s not, because in Vessels’ gloriously ceaseless search, this feels like a beginning.

“We’re always learning and trying new stuff, and the set-up has evolved as the records have evolved,” explains Vessels’ producer and principal songwriter Lee J Malcolm. “The exploration of sound to me is so exciting and that, for me, is the catalyst for everything.

Pete agrees: “Lee once said that ‘it’s a puzzle we might not solve’, but this, this feels like we’ve landed on something.”

Vessels’ fourth full-length album The Great Distraction is due for release on 29 September via Different Recordings.