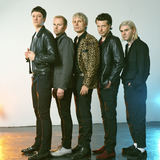 FRANZ FERDINAND
Announce details of ‘Glimpse Of Love (Version)’, a brand new take on the song from their recent album, ‘Always Ascending’. Link to the track HERE

Franz Ferdinand have announced details of the release of ‘Glimpse Of Love (Version)’, a new version of the album highlight taken from Always Ascending, their much-acclaimed fifth album which was released on Domino in February of this year.

Using the album original as a foundation the band returned to the studio, adding the kick and punch of their live arrangement, before handing the track to master mixer Serban Ghenea (Rhianna, Lorde) building upon it to give an even more urgent & thrilling sound.

The album was recorded at RAK Studios, London and Motorbass in Paris, with the help of French producer extraordinaire Philippe Zdar (Cassius, Phoenix, The Beastie Boys). Nothing short of a rebirth, the album’s 10 songs are a triumphant recasting of the group, bursting with fresh ideas and vigorous sonic experimentation.

You can stream ‘Glimpse Of Love (Version) here and download the track here. Additionally, having recently completed a sold-out U.K. tour, including a performance at London’s Brixton Academy, Franz Ferdinand have announced details of a headline show at London’s Roundhouse on Wednesday 26th September 2018.

Tickets for the show are on pre-sale at 9am, Thursday 22nd March and general sale at 9am, Friday 23rd March via www.seetickets.com

Currently finishing up a European tour, the full worldwide dates are as follows:

Tickets for all shows in Ireland, UK and Europe are available to purchase now. More information can be found on the band’s website: http://franzferdinand.com