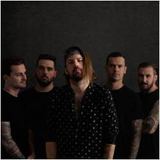 (August 17, 2018)- Columbus, OH rock band Beartooth recently announced the release of their third studio album Disease. The band’s third effort is a stark look inward and the next installment chronicling frontman Caleb Shomo’s battle with his own demons. Today, fans can get another taste of the record with the new track ‘You Never Know.’ Listen here.

“You Never Know” is a song that I wrote with Drew Fulk (aka WZRD BLD). It was the first song we wrote together, we wrote it about 40 minutes, “ says Caleb. “We just went and got coffee and talked about things going on in our lives and our mental states at the time and just sort of came to a common ground and the song just rolled out from there. It’s a jammer, play it loud!”


Disease is a painstaking, riff-driven examination of the unshakeable throes of depression. While there are moments of positivity, this isn’t the sound of triumph. This is music about survival.

“The album is a whirlwind of emotion,” Shomo explains. “Crazy highs, crazy lows, and lots of intensity. This record isn't about winning anything. It's about trying to even begin to learn how to deal with things. It’s hard to process just how dark you can get, what you can really put yourself through with expectations. It's like starting from the beginning all over again. At the end of the day, it is a very dark album.”

Even as Shomo and his bandmates played to sold-out crowds across Europe, the battle against mental illness and childhood issues returned, and the seed for Disease was planted. The title track was the first song written for it, setting the overall tone.

As always, Shomo recorded vocals, guitars, bass, and drums, and mixed the album himself with assistance from an engineer, now with executive producer (and Grammy winner) Nick Raskulinecz, who has worked with Foo Fighters and Rush.

Disease will be released globally on September 28th but today fans can preorder the album and receive instant downloads of album tracks ‘Bad Listener’ and ‘Disease.’ Preorders at the band’s website BeartoothBand.com include limited and exclusive Disease vinyl and merch bundles.

Beartooth is currently on tour in Europe before they hop back over the pond for a full US headline tour starting September 14th and wrapping up November 17th. A full list of dates can be found below.