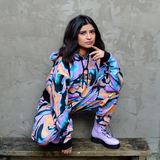 “We consume a lot of vibes on a subconscious level and these days they seem increasingly unkind.
Virtual vibes and false connections are affecting everyone’s mental health. This song is musical

“Soulful vocals set alongside glitchy beats and ethereal, whirring hooks” GET IN HER EARS
“She is breathing much deserved new life into the Trip Hop genre as a whole” DJ MAG

About Unkind Vibrations
‘Unkind Vibrations’ refers to a world suffocating under the mass of excess content, fake
news, social media obsessions and political uncertainty. A minimal beat of kick drums and
reverberating snares channels the 90s hip hop stylings of acts like Common and A Tribe
Called Quest, before merging with Ishani’s trip hop production style and razor sharp bass
grooves. Her stacked psychedelic vocals evoke Kelli Ali, FKA Twigs and Nneka, providing a
gritty and immersive soundscape for an impromptu feature by rapper Steezo. Ishani’s lyrics
offer a bleak glimpse into the saturation of digital culture on our everyday thoughts and
dreams: “I’m on a visual diet / I stay away from the news,” she sings coyly, before
suggesting that music is her salvation: “I make music to relax / And my therapist is cool.” It’s
a confident and slick outing from Ishani whose pithy lyrics capture what it means to feel
human in the growing digital wilderness. ‘Unkind Vibrations’ is the first single off her
upcoming EP, co-produced with Zaflon, which will be coming out in three months. The
artwork was directed by Monique Narboneta of DC Comics and the illustration was by Jax
Nguyen.
About Ishani
You may or may not have heard of Ishani before, but if not, you really should catch up!
Ishani is a singer, songwriter and producer who emerged onto the music scene with her first
track “Pelican Elephant”, a hypnotically groovy, melancholic track, which revealed her
distinctive vocals and was picked up by MTV India. Since 2018, she has been dropping tune
after tune of raw heartfelt vocals, set to atmospheric, glitchy beats, all wrapped up with a
bow of catchy melodies. Her single “Insomnia” landed her the title of BBC Introducing Artist.
In 2019, she performed at the Reading and Leeds Festival, where her single “Nothing’s
Changed” proved to be both a festival hit and a fan favourite. At London Fashion Week, she
graced the catwalk in Hellavagirl’s new collection, accompanied by her dreamy track “Stormy
Emotions”. Her vocal talents were also showcased on a SKY TV series.
She draws on electropop and trip-hop to create music that is both immersive and ethereal.
Her wonderfully eclectic sound is no surprise given the fact that her music influences include
the likes of Massive Attack, Portishead, Morcheeba, DJ Shadow, DJ Krush and
Hooverphonic.
At the forefront of Ishani’s discography is an emphasis on the translation of her inner world
and observations of society into conscious, heartfelt lyrics. This is clear in tracks such as
“Don’t Stop The Fight”, which boldly tackles violence against women; an issue Ishani holds
dear. The song was featured on VH1 and the Indian interactive comic book “Priya’s Shakti”.
She appeared on AlJazeera’s “The Stream Show” to discuss her involvement in the project.
Her song “Dark Angel”, a reflection on the loss of two close friends to suicide was described

by CLASH Magazine as “a highly personal plea for mental health awareness” and highlights
Ishani’s commitment to making music that matters.
Ishani has performed at Sziget Festival; one of the largest European music and cultural
festivals held annually in Hungary. She also opened for the Icelandic electronic group “Gus-
Gus” at the Be My Lake Festival.
Ishani spent part of her childhood in Truro, Cornwall. She then moved back to the sprawling
metropolis of Bangalore, India. Her travels took her to Singapore where she studied
Electronic and Broadcast Media with a minor in Drama at the prestigious Nanyang
Technological University. The journey came full circle when she relocated to London and
graduated from music production college Alchemea with a diploma in Audio Engineering.
She is currently based in London where she is working on her second E.P called ‘Unkind
Vibrations’.