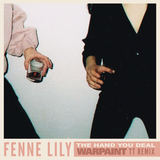 The Hand You Deal

Theresa Wayman of Warpaint/TT has remixed ‘The Hand You Deal’ from Fenne Lily’s debut album ‘On Hold’ having previously given the original a spin on Beats 1. This version dramatically embellishes the song’s existing electronic flourishes, transforming it into a dark and sparse moment, amplified further by the bitter undertones of the lyrics. This is the first time any of Fenne’s tracks have been remixed and speaking about the experience, Fenne herself shares: “I was 14 when I discovered Warpaint and they changed my life. I’d get lifts from a friend to see them play as much as my Saturday job pay would allow - four badass women making dark, beautiful, intelligent music. I wanted to be one, too. So for Theresa to have remixed one of my songs, after igniting that spark 7 years ago, is pretty fucking tight.” Having spent the best part of 2018 touring nonstop - most recently playing her own sold out headline show at The Borderline in London and also supporting Lucy Dacus on her UK tour - Fenne Lily continues her hard work on the road and heads to North America later in November for her first ever dates there, supporting Andy Shauf on a run of East Coast shows. Listings below. Since the self-release of her debut album ‘On Hold’ in April 2018, Fenne Lily has clocked up tens of millions of streams on Spotify alone and has also earned herself a global publishing deal with Universal Music. Fenne wrote and recorded the material that would form ‘On Hold’ between the ages of 15 and 20, while touring the continent with and lending her dulcet tones to the releases of rising alt-stars such as Aldous Harding, Charlie Cunningham, and Marlon Williams. On leaving school, she spent her formative teenage years on the road, walking an uncertain path and playing truant from art college to immerse herself in a life of self-taught musicianship. ‘On Hold’ is a tapestry of heartache and comprehension, realised in record form with the help of friend and musical ally Tamu Massif, members of Champs and legendary producer John Parish. The latter helped add permanence to ‘Brother’, a song written in a drunken black-out and nearly lost to the ether, devoted to the one boy who’s never let Fenne down. Although she sings about heartbreak, Fenne is quick to state that her songs aren't about wallowing in misery. “My music comes from anger, but I can’t sing angrily, so I sing sadly. It’s a sadness that’s fueled by fury.” This is Fenne all over. She’s straight up and to the point. As she puts it herself, there’s “no fannying about” when it comes to her music and that’s what makes it all the more special. FENNE LILY INTERNATIONAL TOUR DATES: Sat 24 Nov WASHINGTON DC, The Miracle Theatre, US ^ Sun 25 Nov PHILADELPHIA PA, PhilaMOCA, US ^ Mon 26 Nov BROOKLYN NY, National Sawdust, US ^ Tue 27 Nov BROOKLYN NY, National Sawdust, US (sold out) ^ Thu 29 Nov CHICAGO IL, Constellation, US ^ Fri 30 Nov CHICAGO IL, Constellation, US (sold out) ^ ^ w/ Andy Shauf