TUNE Skinny Pelembe - I Just Wanna Be Your Prisoner 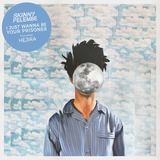 The song reflects the surroundings in which it was made: the synth sounds were sampled from sirens outside the Peckham studio where they recorded. And as Skinny recalls, it was hearing Rahel’s track with Eric Lau, ‘I’m Fine’, on one of the Brownswood Bubblers compilations, which first put him onto Gilles Peterson’s label. It sparked a longtime affinity to its output, and it makes for a neat turn of events to have them collaborate on this new track. “It's come nicely full circle,” he says.

The singer-guitarist-producer, born in Johannesburg and raised in Doncaster, signed to Brownswood earlier this year and debuted with the ‘Spit / Swallow’ single in March. It’s seen support from Dazed, The Quietus and Huck. He’s been invited as a guest onto Jamz Supernova on Radio 1xtra, as well as Tom Ravenscroft and Lauren Laverne on 6 Music. He recently featured as one of the guests chosen for 6 Music’s showcase at The Great Escape. The single release will be followed by Skinny’s maiden UK Tour in September.