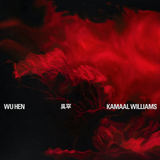 Wu Hen brings groove back to the forefront, oscillating between celestial jazz, funk, rap and r&b reinforced with the rugged beat-heavy attitude of grime, jungle, house and garage – a self-styled fusion Kamaal describes as Wu Funk.

When pressed for insight into the album’s overarching themes, Kamaal proclaims:
“This is a revolution of the mind. A spiritual rebellion: To reach new heights requires separating ourselves from the material world and finding power in what’s intangible. That’s what music and art is for – whether it’s a primitive emotion or something deep, you feel it. And there’s a subliminal element that resonates throughout my work. If you’re painting, it’s what you’re feeling as you’re painting. And the person looking at that artwork or listening to that music, they can feel it too, because it’s sincere.”

The album’s title is also the nickname Henry’s grandma gave him as a child. The Taiwanese side of his family are originally from the Wu Dynasty, and the name Wu translates as ‘Gateway to Heaven'. On Wu Hen a path is traced from his lineage all the way to his current spiritual mission, which is also reflected in the cloudlike cover art by artist Othelo Gervacio.

However – like most people striving – and like the ancient Chinese concept of ying and yang, there’s a dualism, where seemingly opposite forces are at play, which despite a conflict can actually be complementary, with the two sides interconnected and interdependent.

On the LP, transcendental moments of sheer beauty combine with roadman skits and musical evocations of the rowdy energy found in (pre-lockdown) streets, with these contrasting tensions colliding and exploding in beautiful, exciting ways.

New players on this record include Greg Paul (of Kalayst Collective) on drums, Rick Leon James on bass, Quinn Mason on saxophone and guest harp from Alina Bzhezhinska. Multi-talented renaissance man Miguel Atwood-Ferguson (who has worked with Ray Charles, Flying Lotus, Dr. Dre, Mary J. Blige, and Seu Jorge) contributes signature strings, which add vivid colour and rich depth, evoking vintage David Axelrod. There’s also guest features from cult rapper Mach-Hommy and rising r&b artist Lauren Faith.
With Wu Hen, it’s clear the stars were aligned and something very special happened between these players. Every note, every beat, every single sound feels perfectly placed, and although lots of care and years of musicianship infuse the grooves, it feels effortless, with perfection pouring out of the speakers and into your soul.