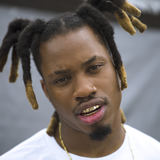 Produced by long-time collaborator Ronny J, ‘Skywalker’ follows Denzel’s recent EP, ’13’ — a record he described as functioning around the concept of misfortune. Switching up his flow, ‘Skywalker’ instead showcases a different side to Denzel’s lyrical palette, swapping intense, firecracker spitting for reflective, zoned-out bars. Widely considered one of the most unique voices in US rap, it serves as a primer to his forthcoming ‘The Life Of 13’ European Tour, which includes a headline UK show at East London’s Village Underground on November 29.

Raised in Carol City, Denzel came up as a member of SpaceGhostPurrp-founded collective Raider Klan, before branching out to release debut solo project, ‘Nostalgic 64’, in 2013 to widespread critical acclaim. His mixtape (and most extensive work to date), ‘Imperial’, was released in 2016, featuring collaborations with Joey Badass and Rick Ross, as well as a special remix of album track ‘Knotty Head’, which featured a guest verse from rising UK star, AJ Tracey.