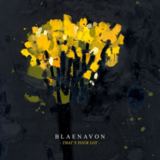 Blaenavon announce debut album That’s Your Lot, released 7th April on Transgressive Records And share details of full UK headline tour, with biggest show to date at London’s Heaven plus dates with Two Door Cinema Club and Sundara Karma That’s Your Lot will be available on Double LP, CD and Digital Pre-order the album at www.blaenavon.com That's Your Lot is 5 years of our lives condensed into 59 minutes of yours. Youth, capriciousness, duality, duplicity, love, bitterness, fate. Songs from the human core: some malleable, long considered - others pure, direct, cruelly honest. An album to bathe in and appreciate the inevitable end. Ben Gregory, Blaenavon Following a breakthrough 2016 which saw them sell out London’s Scala, fill tents at Glastonbury, Reading & Leeds and Latitude, ink a US deal with Canvasback/Atlantic and release a run of critically acclaimed singles, Blaenavon are pleased to share news of their long awaited debut album, That’s Your Lot - alongside the music video for brand new single, ‘Orthodox Man’. Recorded with Grammy-winning producer Jim Abbiss (Arctic Monkeys, Adele, Bjork) the LP marks a certain milestone for the band - a sumptuous, thrilling and brave collection of songs written throughout their teenage years and now fully realised. Intensely personal, yet exploring the universal experiences of friendship, sadness, hope, love held and lost, and all the confusions of youth - a body of work to help define a generation. That’s Your Lot includes ‘I Will Be The World’, ‘Let’s Pray’ and ‘My Bark Is Your Bite’ - a more than impressive run of singles collectively racking up over 1,500,000 Spotify streams. The album will also feature explosive new single ‘Orthodox Man’, Blaenavon’s most immediate moment to date and already a firm fan favourite following a series of incredible live performances. The song’s accompanying music video was shot by director Francesca Consarino during the band’s first trip to New York City for two packed out shows in the Winter of 2016. The band is also excited to share details of a new headline tour in support of That’s Your Lot, which includes a landmark show at London’s Heaven on April 7th. Blaenavon will also be joining Sundara Karma on their UK dates, before a lengthy run throughout Europe with Two Door Cinema Club. A fulsome Summer of festival appearances awaits thereafter, in addition to further international touring. 2017 will see Blaenavon come of age as the most exciting act in the country, and beyond.