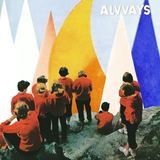 Alvvays announce their second album, Antisocialites, due for release on 8 September via Transgressive in digital, limited edition white vinyl, CD and cassette formats. The album is the much-anticipated follow-up to their critically acclaimed debut album which received accolades from Pitchfork, NPR, Rolling Stone and more. Across its 10 tracks and 33 minutes the Toronto-based group dive back into the deep-end of reckless romance and altered dates. Ice cream truck jangle collides with prismatic noise pop while Molly Rankin's wit is refracted through a crystalline surf counterpoint. Through thoughtful consideration in basement and abroad, Alvvays has renewed its Scot-pop vows with a powerful new collection of manic emotional collage. After posting a cryptic cartoon for fans last week, the group today released the excellent strum-n-thrummer "In Undertow," a breakup fantasy that is both crushing and charming for its level-headedness. "You find a wave and try to hold on for as long as you can, you made a mistake you'd like to erase and I understand," sings Rankin, her voice full longing, not for another person necessarily, but for what to do next. "Meditate, play solitaire, take up self-defense," Molly continues, laundry-listing some strategies for moving on. "What's next for you and me? I'll take suggestions," she deadpans under crashing waves of Farfisa and feedback. "This record is a fantasy breakup arc and my life nearly imitated art." - Molly Rankin. The band will be embarking this summer on an extensive world tour. All dates can be found below. image003.png Antisocialites is out September 8th Antisocialites tracklisting 1) In Undertow 2) Dreams Tonite 3) Plimsoll Punks 4) Your Type 5) Not My Baby 6) Hey 7) Lollipop (Ode to Jim) 8) Already Gone 9) Saved By A Waif 10) Forget About Life Alvvays World Tour (UK dates in bold) 8.26.17 - Belgrave Music Hall - Leeds, UK 8.27.17 - St. Luke’s - Glasgow, Scotland 8.28.17 - Leadmill - Sheffield, UK 8.29.17 - Talking Heads - Southampton, UK 8.31.17 - End of the Road Festival - Larmer Tree Garden, UK 9.3.17 - Institute 2 - Birmingham, UK 9.4.17 - Rescue Rooms - Nottingham, UK 9.7.17 - Gorilla - Manchester, UK 9.8.17 - Koko - London, UK 9.9.17 - Thekla - Bristol, UK