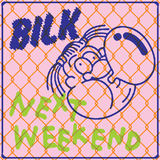 BILK release ’Next Weekend’ with an impact date of 23rd November.

The 18-year-old Chelmsford trio, who have been championed by tastemakers on Radio 1, 6Music, Radio X and Amazing Radio, release their blistering new single ‘Next Weekend’.
The track has been produced by Duncan Mills (The Vaccines, Florence & The Machine, James Murphy).
BILK have also been strongly supported by BBC Introducing In Essex’s Ollie Winiberg, who premiered the track on his show and has previously had the band in for a session.
BILK have been growing a dedicated fanbase through the relentless touring of their visceral live show - having opened the Main Stage at RIZE Festival and recently appeared at Neighbourhood Festival, the band have just announced a new run of dates for Oct/Nov/Dec (below), including a show as part of Abbie McCarthy’s Good Karma Club on Oct 25th.


Frontman Sol’s Dad, who is a cab driver, inspired the band’s name - which comes from ‘Getting Bilked’, cabbie talk for when a customer runs off without paying the bill.