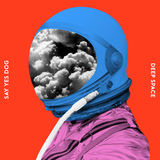 German-Luxembourgish electro-pop trio Say Yes Dog have announced their sophomore album 'Voyage' will be released on 10th May via Discodogs Records.

‘Deep Space’, the first single taken from the upcoming new album, is a perfect introduction to its cosmic musical style and theme.


LISTEN TO ‘DEEP SPACE' ON SPOTIFY AND SOUNDCLOUD

The invitations to play festivals in far away places like India, Korea and Vietnam seemed the perfect excuses for the band to pack their bags and go in search of adventures: they got to meet the venerable Mr Kobayashi while in Japan on a hunt to find some rare synthesisers; they wondered the golden opium fields, crocodile-infested lakes and jungles of Vietnam; they were granted an audience with the King of Accra in Ghana, which almost ended them in jail. They got lost in Seoul, looking for Tarantino’s favourite bar, and they found themselves sipping tea with a prince in the Rajasthan desert.

It may all sounds like an action movie plot, but it simply was Aaron, Pascal and Paul’s journey of a lifetime. ‘Voyage’ seems a fitting name for an album inevitably inspired by the band’s unforgettable travels and stories. But the title also refers to their undying love for the 80s Space nostalgia aesthetics.

The result is a clean, minimalistic and honest album, which sums up the core message of ‘Voyage’: Say Yes Dog have travelled far, come far, and are now exactly where they should be – in their own galaxy of artful, heart-warming electro-pop. Their sound has matured into songs with a higher attention to melody and driving hooks, but with both feet firmly set on the dance floor.

Say Yes Dog will be touring in the UK and Europe in the coming months, with more dates to be announced soon.