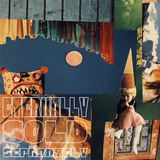 Today, they share new track 'Eternally Sold Separately'. Merging their tongue in cheek lyrics with an upbeat tempo, Mass Datura jump straight into the deep end with this track as the driving bass line plummets through a tidal wave of garage rock. The rhythm guitar steers the band through a wave of sonar emotions from warped echoing ambience and orchestral crescendos, to all-out aggressive art-rock choruses.

Eternally Sold Separately playfully showcases the band’s ability to switch between light and dark by unapologetically catapulting jagged and abrupt changes at whim throughout. The lyrics "Welcome to the fine farewell, it’s a suicide, not a digital joke… In this fantasy of who you become and what you learn to be, a human unfolds", masterfully demonstrate an abstract lyrical journey through contrasting postmodernist imagery.

'Wish Untitled' is the follow-up to 2018's debut 'Sentimental Meltdown'. Recorded straight to tape in a studio in the middle of nowhere in the French countryside, the album captures band leader Thomas Rowe's songs with immediate energy and analogue warmth. The result is a personal, but willingly shared, journey through the emotional upheavals we're all familiar with: fractured companionships, the perils of damaging dependency and the feeling of crumbling under the weight of a world that doesn't care.

With a name originating in 16th-century occult mythology, Mass Datura initially formed as an outlet for Canadian poet, artist and cordwainer Thomas Rowe and music graduate Joseph Colkett to channel their unusually broad patchwork of experiences into masterfully playful songs. The band’s inspirations at the outset were taken from the sounds of grunge, alt-rock, doo-wop, blues and American folk. However, in more recent years they sought fervour from the operatic when classically trained violinist and soprano Leanne Roberts, and the artistic when The Horror’s guitarist Joshua Hayward, ICMP graduate Patrick Bartleet and UAL art major Christy Taylor joined the line-up. Mass Datura’s choice of instruments in itself demonstrates how these extensive genres interplay; vocals, guitars, bass, drums, synths/mellotron, lap steel guitar and violin. People often say that too many cooks spoil the broth, however, this group of East London misfits are on a quest to break the mould. According to Josh, their latest songs distinctively fuse the classical with the obscure in a manner which is “nothing short of a John Carpenter movie in the making”.

Mass Datura have earned their reputation for mesmerising, raw and unpredictable live performances, and are setting their sights towards a global audience. The band’s “proggy, space-age pop” (DIY Mag) was welcomed with open arms across nine UK cities in their most recent tour with Canadian psych-rockers Black Mountian. However, Mass Datura have been cooking up a storm across the UK for a while having played a celebrated spot at Liverpool International Festival of Psychedelia 2017, headlined Field-Trip Festival 2019, Brighton and supported several acclaimed artists along the way including The Black Angels, A Place to Bury Strangers, L.A. Witch, Dark Horses and The Vacant Lots. New shows will be announced soon.