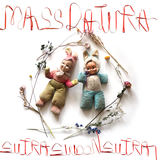 London band Mass Datura has announced the released of their sophomore album 'Wish Untitled', out on 10th July on All Types of Slime Records. Today, they have shared the opening track 'Sutra Swoon Sutra'. Minimal at first, the song springs into a chorus of orchestral sounds. Layered violin, synths and a combination of hi and lo-fi vocals grapple for attention before resolving to a deep and earthy piano rise, guiding the spring reverb vocals “it’s a fairytale for two and we're down on our knees, sutra swoon sutra” to a close. 'Wish Untitled' is the follow-up to 2018's debut 'Sentimental Meltdown'. Recorded straight to tape in a studio in the middle of nowhere in the French countryside, the album captures band leader Thomas Rowe's songs with immediate energy and analogue warmth. The result is a personal, but willingly shared, journey through the emotional upheavals we're all familiar with: fractured companionships, the perils of damaging dependency and the feeling of crumbling under the weight of a world that doesn't care. Rowe, who hails from Canada, writes often surprising and playful songs that draw from an unusually broad patchwork of experiences: from growing up in a working-class family next door to a First Nations Reservation on Vancouver Island, to becoming a sponsored skateboarder in San Francisco/LA, to winding up a bespoke shoemaker in London. He has also published three books of poetry and exhibited his collage art. In Mass Datura, he is joined by Patrick Bartlett on drums, Joseph Colkett on bass, Alice Hubley on synths and mellotron, and Leanne Roberts on violin, Joshua Hayward (The Horrors) on pedal steel guitar. In the last couple of years, Mass Datura played at Liverpool Psych Fest as well as toured with the likes of Black Angels, A Place To Bury Strangers, Black Mountain and Greg Ashey. New shows will be announced soon. www.massdatura.bandcamp.com www.instagram.com/massdatura www.facebook.com/massdatura www.twitter.com/massdatura www.soundcloud.com/mass-datura