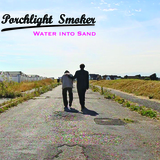 ‘Water Into Sand’ is the third album by Sussex based Roots / Americana band Porchlight Smoker.

Originally formed as a duo in 2008 by Kent-born Fred Gregory (mandolin, guitars, vocals) and Scott Smith, from Wichita, Kansas (lap-steel, guitars, banjo, harmonica, clarinet, vocals), the band went on to add Steve Bell, from Dundee (banjo, mandolin, guitars, vocals) and Scott Warman (double-bass, vocals) in 2011. All four band members contribute to the songwriting, with each bringing a range of different musical influences to the table – from Celtic, Rock, right through to American Roots but all perfectly blended to create their unique sound.

The band’s self titled debut album was released in 2009, and described by one critic as “perfectly flawed”. Album number two – imaginatively titled ‘2’ – received national and regional airplay along with some great reviews along the way…

‘A timeless record, fusing elements of folk, bluegrass and country. Not every day you hear so many instruments played – guitar, banjo, mandolin, double bass, sparse percussion and even a jew’s harp” - Tom Robinson, BBC Radio 6

‘Water Into Sand’ is the perfect next step for Porchlight Smoker, featuring a majority of self-penned songs and drawing on the band’s multi-national and multi-instrumental talents to produce a fascinating blend of Roots, Folk and Americana.