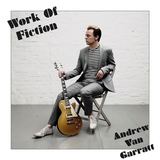 Andy was signed to Atlantic Records and had significant airplay on MTV and Radio 1 with his old band, No Hope In New Jersey. This culminated in a main-stage performance at the V Festival. When the band split, Andy was at a loss, but one day he received a parcel from his uncle: the biography of Jimi Hendrix. The days Hendrix spent as a sideman fascinated Andy, and inspired him to learn more about his craft as a musician. This was the start of eight years’ apprenticeship playing various styles of music in bands all over the world. In 2015, Andy returned to England for the wedding of his sister. His apprenticeship over, he decided to stay, and work on his own material. Andy advertised online for a drummer and bassist. They started rehearsing and went into the studio to record the three songs which became the Sick EP. The songs ‘Stay Like The Rain’ and ‘Doctor Zane’ were featured on BBC Introducing. Lal Muttock of BBC Northampton said: ‘Absolutely amazing! Riffs man, just riffs. There’s not enough widdle-fest in metal music or rock music [these days].’ These songs were also played on online radio stations, including TBFM radio (soon to merge with Hard Rock Hell Radio) and others, as far afield as Germany. “Andrew Van Garratt is not new to music by any stretch of imagination. And you can really hear this in this nicely crafted track ‘Pass Away’.” – Dean Jackson, BBC Introducing East Midlands After the success of the EP and with a stockpile of songs he wanted to record, Andy dove headfirst into making an album at Far Heath Studios in Northampton, with Angus Wallace at the controls (The Prodigy, The Fall, etc.) Drawing inspiration from Nirvana, The Kinks, The Fall, David Bowie, Weezer, The Who, Blur and Neil Young, they recorded two songs a month, and the project grew organically into the album Work of Fiction. Andy comments ‘Although I was selling other styles of music online for licensing (32 tracks to date), I wanted to make a well-balanced album which was fundamentally rock and roll and referenced the music which inspired me to play in the first place as a teenager. Variety was key, however. I wanted to draw on the styles and skills I had acquired playing around the globe to keep things interesting, injecting different colours. Some songs are heavy rock, while others are acoustic with no electric guitars. The lyrics are equally varied, covering topics ranging from love, to mindfulness, to paranoia, to selfie culture, encompassing aspects of nostalgia too. ‘In conclusion, I like to think of Work of Fiction as fresh and eclectic, and yet possessing integrity.’ To date, 9 songs from Work of Fiction have been played on BBC Introducing.