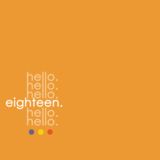 ‘Eighteen’ is taken from the rising Edinburgh-trio's forthcoming debut ‘hello EP’ via LAB Records and was produced by Rich Turvey (Blossoms).

The band have been championed by radio tastemakers including Radio 1’s Jack Saunders and Huw Stephens, 6Music’s Steve Lamacq (who recently had the band record a session for his show) and Radio X’s John Kennedy. Vistas have also been featured as a ‘Record Of The Week’ on Virgin Radio and playlisted at both Radio X and Amazing Radio. Vic Galloway at BBC Introducing in Scotland is also a strong supporter and has had the band in for a live session.

Following a sold-out co-headline tour with TOUTS, support slots with The Wombats and Gerry Cinnamon, and performances at The Great Escape, Neighbourhood and TRNSMT; Vistas will be hitting the road with with Circa Waves, BLOXX and Fatherson before embarking on their very first UK Headline Tour in May/June this year - they will also be appearing at Truck Festival later in the year. Full dates below.