TUNE The Magic Gang - Getting Along 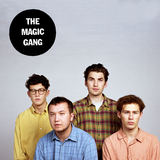 The Magic Gang release new single ‘Getting Along’ via Yala! Records with an impact date of 23rd March.

The band will release their self titled debut album on 16th March 2018.

NOMINATED FOR BEST NEW ARTIST AT NEXT WEEK’S NME AWARDS

“[A] distinctly British take on the slacker pop sound of the likes of Mac DeMarco, Weezer and Pavement.” – NME

“They sound like a cheerful, melodic as fuck amalgamation of bands like Avi Buffalo and The Smith Westerns and the very best pop groups from the 1960s.” – Noisey
“In creating pop with an outsider’s sensibility but an optimist’s spirit, The Magic Gang make a pretty good case for the guitar band being alive and well.” – The Times

“The Magic Gang have cruised their way into becoming one of Britain’s most effortlessly exciting bands.” – DIY

“One of the most exciting new bands on the planet.” – Dork

“The Brighton band never fail to impress, with their smart-as-hell brand of art rock coming equipped with some sterling pop hooks.” – Clash

With youthful exuberance and a catalogue of life-affirming slacker pop anthems, it’s no wonder that The Magic Gang are at the forefront of 2018’s breaking guitar bands. Recently nominated for Best New Artist at the NME Awards, The Magic Gang will release their self-titled debut album on March16th on Yala! Records.

The announcement comes after the band’s new single ‘Getting Along’ was premiered last night as Annie Mac’s Hottest Record. Juxtaposing joyful melodies with lovelorn lyrics, the track’s relentlessly infectious hook adds another contemporary-yet-classic anthem to The Magic Gang’sburgeoning songbook.

Collectively the album presents a twelve-track snapshot of everything that The Magic Gang are about. The buoyant bangers that have been mainstays of their raucous live shows are represented by the likes of ‘Jasmine’, ‘All This Way’ and ‘All That I Want Is You’. The latter song was inspired by tales from Brian Wilson’s controversial autobiography ‘Wouldn’t It Be Nice’, especially in regards to his reclusive years following the peak of The Beach Boys’ success.

The album also includes the recent singles ‘Alright’, ‘Your Love’ and ‘How Can I Compete’ alongside moodier, piano-orientated, harmony-rich material such as ‘Take Care’ and bittersweet, singer-songwriter vibes on ‘I’ll Show You’.

The majority of the album was produced by Jolyon Thomas (Royal Blood, Slaves), while James Dring (Loyle Carner, Jamie T) and former Maccabees guitarist Hugo White both produced a track each. Every song was written by the band – Paeris Giles (drums), Jack Kaye(guitar/vocals), Kris Smith (vocals/guitar) and Angus Taylor (bass).

The album tracklisting is:

After touring with Wolf Alice and Sundara Karma, the band’s forthcoming headline tour runs as below:

In addition, The Magic Gang have announced their first festival of the year with the news that they’ll play Live At Leeds on May 5th.