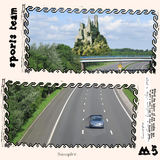 BAND TO RELEASE KEEP WALKING! EP ON MARCH 8th VIA THEIR OWN HOLM FRONT IMPRINT

"Their show is an impressive one, a reminder of why indie made it back from the brink, loaded with both earworms and emotion" - The Guardian

Following the 2018 releases of their debut EP and standalone singles 'Kutcher' and 'Margate', Sports Team today return with 'M5'. Recorded with Jolyon Thomas (Slaves, Royal Blood, The Magic Gang, Kendrick Lamar) their latest single treads a uniquely English path, but one which now feels definitively Sports Team’s. Lyrically, it introduces the character of a disgruntled motorway commuter, and it’s songwriter Rob Knaggs' pithy, sardonic observations that catch the listeners ear, with a line about the ‘jelly bean air freshener, swinging in the window screen’ as memorable as the pile up.

Unsurprisingly, the song conjures all the erratic euphoria the band have become known for, driving guitar-work, shifting rhythms, and deliciously infectious melodies. It’s what’s made the track an easy fan favourite on their recent UK and European tour with Hinds. "No one had heard the song, but by the second chorus we had crowds singing the lyrics back to us" comments drummer Al Greenwood. It’s indicative of a winning formula, the reason the band, at such an early stage, are able to announce dates like London’s 1,500 capacity Electric Ballroom as part of a tour without it feeling a day too soon.

Ahead of their sizeable upcoming UK jaunt, the band will release a brand new EP entitled Keep Walking!, which looks set to feature songs the band have recently been trialling on the road - including the first recorded version of fan favourite 'Ski Lifts' . Full details will be announced soon.

Having first released music in January 2018 with their Winter Nets EP, the past 12 months have been good to Sports Team as early single ‘Kutcher’ was named Annie Mac’s ‘Hottest Record in the World’, trademark single 'Camel Crew’ declared Noisey's 10th best song of 2018 and EP cut ‘Beverly Rose’ winning Steve Lamacq's Round Table. The band finished the summer by headlining the BBC Introducing Stage at Reading and Leeds and selling out London's 800 capacity Scala, while gracing the covers of both DIY and long-time backers So Young Magazine to end the year, frontman Alex Rice was even named as one of Vogue’s ‘50 Hottest Boys in the World’.

Backing up the band's seemingly audacious arena claims, 'M5' is the sextet's most ambitious, festival-ready moment to date and one that solidifies their standing as the UK's most exciting band.