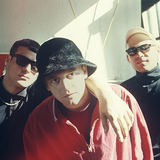 DMA's release 'Step Up' on 4th November 2016 via Infectious Records.

'Step Up’ is one of the DMA'S more beautiful songs and director Errol Rainey manages to produce the perfect video to complement the raw emotion that is delivered vocally as Tommy O'Dell lays himself bare as he sings:

"Losing expression, facing the order, step up the morphine, stand by my side...Bored of rejection, caught in the heavens, planning a new one, taking the sky..You were the silence in my brain, unsettled by the weather...We built a kingdom in the rain, I think we're getting better...Sometimes I wonder why we bother at all."

Since DMA’S burst on the scene last year they have not stopped with thrilling and anthemic shows all over the world. Debut Album ‘Hills End’ was a Top 40 album when was released earlier this year via Infectious records. Singles ‘Lay Down’, ‘In the Moment' and ‘Delete’ caught the attention of the British media including support from Radio 1, Radio X, 6 Music and ‘Record of The World’ from Zane Lowe (Beats Radio).

DMA'S  played a sold out UK tour in February and have since embarked on a worldwide tour, including Coachella, SXSW, Reading & Leeds... rapidly cementing a reputation of a live band not to be missed.