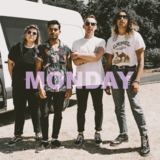 BLOXX are storming back into your life with brand new single ‘Monday’. It’s taken from their upcoming debut EP ‘Headspace’ which is promised next year on Chess Club Records.

No one bottles teenage-angst like Uxbridge four-piece Bloxx. Their highly contagious string of singles released over the last year (including the Annie Mac championed ‘Novocain’) has set a high bar for what needs to come from a band in 2018 – unapologetic indie pop rock that’s as distinctive as it is infectious and fast becoming instantly recognisable as they continue to impress.

Bloxx have spent most of the summer on the road playing a run of UK festivals to bigger and bigger crowds as word of their terrific live show spreads further and further. They’ve played slots at Latitude, Truck and most recently packed out the Festival Republic tents at Reading and Leeds, whilst still finding time to record some new music that is finally ready.

‘Monday’ is their next offering, taken from their debut EP which will be released year. Released on Chess Club, it’s yet another ferocious slice of thrashing indie pop rock that once again elevates Bloxx to another level as they continue to prove themselves as a serious force to be reckoned with.

But with one eye always on the next time they can hit the road, Bloxx are already looking ahead to their hotly anticipated October tour of the UK – a chance to try out all the tricks learnt on festival stages this summer, and also to play some of the new music in the live arena. They’ll kick things off in Norwich on the 28th October and play 20 non-stop shows before reaching London on the 22nd November.